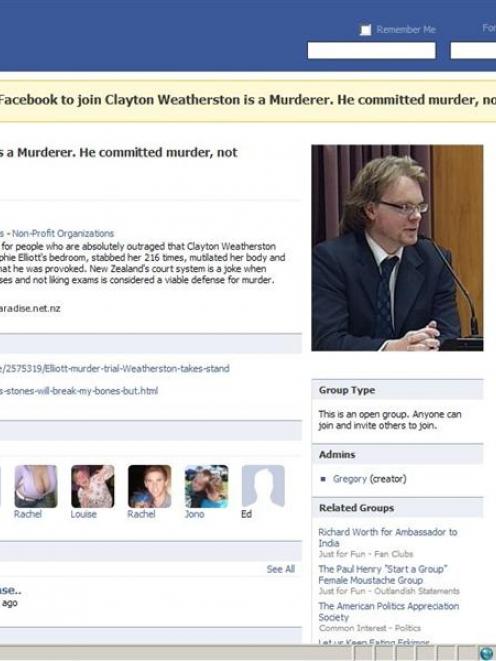 Contempt? This Facebook group was started during the Weatherston trial and taken down after the solicitor-general's office said it was investigating whether it breached contempt-of-court rules.
Recent cases have highlighted the challenges modern digital media present to traditional laws of "contempt" - which govern what can and cannot be published before and during trials. Debbie Porteous examines the issues.

The internet presents such a real and insurmountable challenge to governments trying to ensure a fair trial process, the only way to deal with it is to change contempt rules, an Auckland law professor says.

Criminal procedures specialist Associate Prof Scott Optican, from Auckland University, said with the number of "citizen journalists" growing, it would be impossible for the Government to afford the resources it would take to police the internet and prosecute individuals for contempt.

"Getting involved in that thicket is really something you can't do."

There were also issues around people's freedom of speech.

The only way to deal with the issue was to rethink contempt and sub judice rules, he said.

For example, as part of pre-trial vetting, potential jurors could be asked questions about their knowledge of a case and more use could be made of other mechanisms in the justice system, such as venue change.

The debate about contempt laws has been reignited because of opinions expressed publicly on talk-back radio and the internet during Clayton Weatherston's murder trial.

The sub judice rule seeks to restrict the publication or broadcast of material which could prevent a fair trial.

Printing sub judice information is a contempt of court.

Among the information considered to breach the sub judice rule if published before or during a trial is: evidence ruled inadmissible; evidence not admitted or excluded from the jury; interviews with witnesses; comments on the character of the accused (jurors might infer the accused is guilty regardless of the evidence brought before the court) and anything that prejudges the merits of criminal proceedings.

During Weatherston's trial, a wave of public feeling was expressed on the internet in blogs and on social networking sites.

One Facebook group started during the trial was called "Clayton Weatherston is a murderer. He is guilty of murder not manslaughter."

And in a serious "error", the Stuff website stuffed up with a headline announcing Weatherston "Guilty of Murder" - a day before the jury reached its verdict.

Fairfax Media Group executive editor Paul Thompson said: "It was a mistake. It is the kind of mistake we take very seriously."

The story, posted on The Press' page of the Stuff website by a Christchurch-based staff member, was taken down in a "matter of minutes", he said.

University of Canterbury political science and communication Associate Prof Jim Tully said it was a "dreadful mistake" and reinforced how careful people needed to be with the internet.

Some of the other blogs and social networking sites now face an anxious time, after the solicitor-general's office announced it was investigating whether they had breached contempt-of-court rules.

Otago University law dean Prof Mark Henaghan said Weatherston's lawyers would have been "absolutely correct" to argue a mistrial if they considered blogs and other statements were building up a perception he was guilty.

The tricky part for lawyers was proving the comments had influenced the jury.

Media law specialist Prof Ursula Cheer, from Canterbury University, said she believed the internet was largely ignored by the New Zealand judiciary because of the impracticalities of monitoring it.

Blogs tended to be regarded as being like gossip around the watercooler.

David Farrar, the creator of Kiwiblog, one of the sites under investigation, and Gregory Edwards, the administrator of the Weatherston Facebook group, both pulled all comments related to the trial and Weatherston after they learned the solicitor-general's office was investigating them.

Mr Farrar said he did not consider himself part of the media and had not known the sub judice rules.

Prof Cheer said people responsible for publishing information on the internet needed to understand it was risky to use speech in that way and that laws applied.

Justice Minister Simon Power this week said he was aware of the calls for contempt laws to be revamped, and the Government had said the matter needed to be addressed. - Additional reporting, Hamish McNeilly