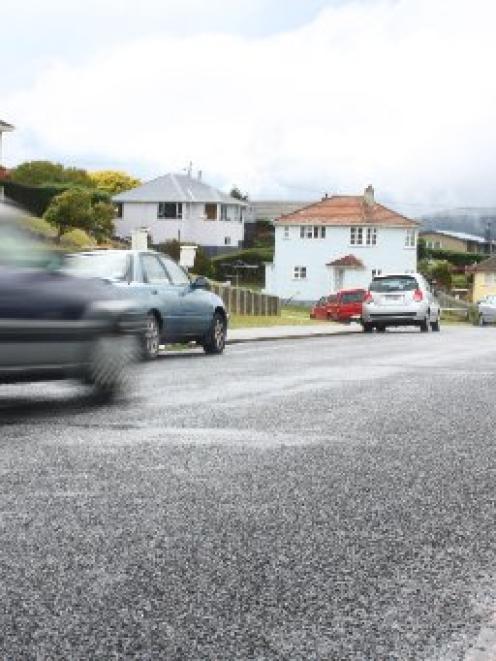 A Stenhope Cr resident wants the Dunedin City Council to install speed bumps on the road to stop speedsters. Photo by Tim Miller.
A Stenhope Cres resident is worried speedsters using the road will cause a serious accident if something is not done.

Bob, who did not wish to give his last name, had lived on the sleepy Corstorphine road for many years but in the last 12 months things had ''gone bananas'' with drivers using the road regularly exceeding the speed limit.

The hoons were usually ''young fellas'' with souped-up cars. Some lived in the area and others did not.

''If a kid ran out into the road they wouldn't have a chance,'' he said.

Bob had taken down several plate numbers from speeding cars and reported them to the Dunedin City Council. He had not gone to police because he did not think they would do anything.

Bob believed the best way to combat the problem would be to build speed strips on the road.

DCC senior traffic engineer Ron Minnema said risk maps showed Stenhope Cres had a low crash risk and had no crashes in the last five years. There had been a minor accident in the nearby May St in that time.

The crescent was unlikely to warrant speed bumps, he said.

Risk maps recorded the number of crashes and classified roads into one of five risk bands.

Although a road might be classified as low risk it could potentially contain high-risk areas such as school crossings.

Mr Minnema said low-risk roads were not ignored but resources were prioritised to high-risk areas.

If it was safe to do so, witnesses were advised to note down a vehicle's details to pass on to police.