Dunedin South is set to become an even more southern seat, taking in all of South Otago from Clutha-Southland and extending down as far as Kaka Point. Photo: Stephen Jaquiery
The southern electoral map is likely to be completely redrawn following the release of draft electorate boundary changes.

As reported in the Otago Daily Times today, the two Dunedin seats face a major makeover, with Dunedin North starting near Waikouaiti and extending down as far as Andersons Bay Rd and taking in Otago Peninsula.

Dunedin South becomes an even more southern seat, taking in all of South Otago from Clutha-Southland and extending down as far south as Kaka Point and as far west as Raes Junction.

The Representation Commission, an independent body which reviews the boundaries of electorates after each census, revealed its draft changes this morning.

Its adjustments to boundaries are recommendations, with the final battle lines for the 2020 and 2023 elections to be confirmed in April next year, after public consultation and an objections period.

All the southern electorate seats are held by comfortable majorities by their respective MPs.

However, Dunedin South - which will have a new MP after the retirement of Labour incumbent Clare Curran next year - may well now be regarded as a possible marginal by National if enough rural polling places move into it. 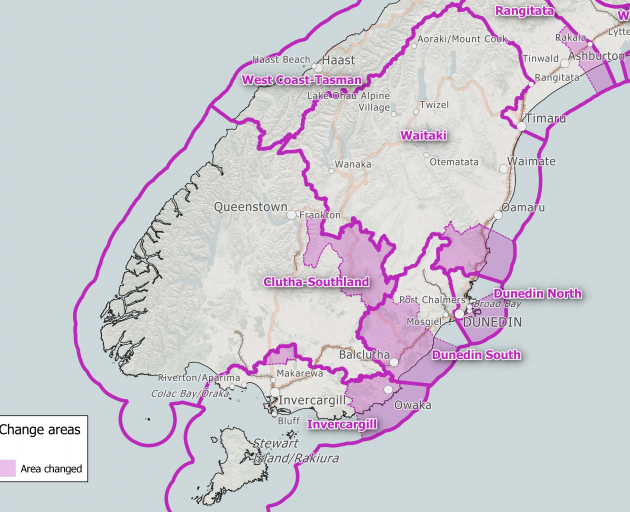 The proposed changes. Image: Supplied
Other major changes in the south included Clutha-Southland gaining Alexandra and Clyde area from Waitaki, and Winton and The Catlins being added to Invercargill from Clutha-Southland.

Nationally, population growth has seen the commission recommend a new Auckland seat be created; called Flat Bush, it would take in parts of the existing Hunua, Manurewa and Papakura electorates.

"Boundary changes are needed to electorates in the Christchurch area because of significant population growth in Selwyn, which is the fastest growing electorate in the country,'' commission chairman Judge Craig Thompson said.

Anything with a high number of rural isnt going to vote Labour or NZF this time arround. Sth Dunedin may still side with Labour but Jacinda's substandard delivery of projects and leadership should put a lot off.

Let us all hope the seat becomes a swinging seat. Those seats get the best government pork barreling. More schools, better roads, all sorts of facilities.

The electorat vote under MMP merely givs the voter the local representativ to look after their local interests. It does not decide who governs.

The party vote does that. So we can vote for the local rep we think will do the best job for us, and at the same time, with the party vote, say who we want to be the Government, and our next PM: Jacinda or Simon?