Council to evaluate taking over buses 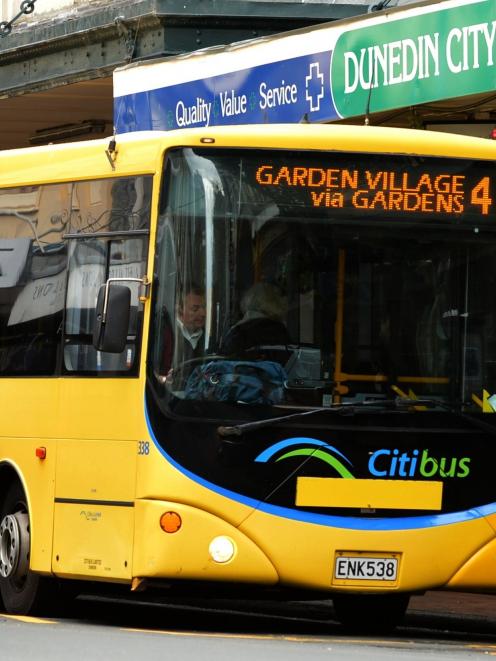 Dunedin city councillors have voted to support in principle a transfer of public transport governance from the ORC to the DCC, subject to a detailed report into the transfer. Photo from ODT files.
The Dunedin City Council wants access to more than $1 million held by the Otago Regional Council for the city's public transport network, as part of any transfer of responsibility for the service.

The move came as some councillors at yesterday's 2014-15 annual plan deliberations warned taking over the network could cost ''millions'' and drive up rates over time.

That did not stop councillors voting 11-4 to support in principle a transfer of public transport governance and planning responsibilities from the ORC to the DCC.

The move was subject to a more detailed report into the transfer, expected later this year, and would also require further council deliberations and public consultation.

Most councillors also agreed yesterday the $300,000 cost of studying the transfer should be covered by the Dunedin Transport Reserve fund held by the ORC.

The money was collected by the ORC through a targeted rate for public transport initiatives in Dunedin, including the introduction of electronic ticketing in the city.

It was expected to be worth about $1.1 million by the time any transfer occurred, prompting some councillors to suggest it should be used by the city council to cover the cost of preparing for any change.

And, after a marathon three-hour debate, it was decided Mayor Dave Cull and council chief executive Dr Sue Bidrose would approach the regional council about the issue.

Dr Bidrose told the meeting the transfer of the ORC's funds would depend on whether it was considered a legal use of the fund.

If it was, the DCC's request could be considered favourably, Dr Bidrose expected.

Dunedin Mayor Dave Cull was among those to support more work on the governance transfer, saying the council should take responsibility for guiding the city through issues of energy depletion, rising prices and other challenges.

Public transport would be important in any response and the city council needed the ability to co-ordinate public transport planning with other areas of interest, he said.

''I think that's our responsibility as a city council.''

Deputy mayor Chris Staynes also supported the move, but said the council should be upfront about the likely cost to ratepayers of taking over, and improving, public transport.

''There will be a need to increase rates. I don't think there's any doubt about that.

''You don't get better for nothing.''

Cr John Bezett opposed the move, saying he was ''not convinced'' the DCC would run the network any better than the regional council, which was already making improvements.

There would also be political pressure on the city council to improve the service, at extra cost, beginning with demands for a new central city bus hub costing ''millions'', he predicted.

''There will be huge expectations from the public for us to get the system up to maybe silver or gold-plated, and that will cost money.''

There was also the ''real'' risk from declining patronage, as more people switched to cycling or other transport options in future, which could lower council revenue, he said.

Instead, a joint ORC-DCC committee - tried without success in the past - should be reinstated to make improvements, he believed.

Cr Thomson also questioned the ''conceit'' behind assumptions the DCC could do a better job than the regional council.

He would not support the move, despite seeing some potential benefits, saying the decision was akin to choosing from ''tripe or tofu''.

''You know, either way you go, it's going to taste unpleasant,'' he said.

Cr Vandervis said any transfer would come at the wrong time for the council.

''I believe it opens the door for a raft of spending that we simply cannot afford, much as I would like to ... we have too much on our plate at the moment to seriously get into this.''

However, other councillors supported the move, including Cr Aaron Hawkins, who said an effective and affordable bus service ''shouldn't be considered a luxury item in a 21st-century city''.

Cr Kate Wilson supported a detailed investigation of options, after years of public calls for the city council to improve a public transport network it was not responsible for.

Cr David Benson-Pope did, as well, after criticising the standard of the city's existing bus fleet, but warned the council could face ''all sorts of difficulty and cost''.

Cr Neville Peat backed the move with the caveat that access to the ORC's funding needed to be pursued ''as strongly as we can''.

Dr Bidrose would meet ORC representatives as early as today to discuss access to the regional council's funds.

Meanwhile, a ''due diligence'' study of options and potential fishhooks would begin, with staff to report back to councillors later this year, council infrastructure and services general manager Tony Avery said.

Councillors would then vote on whether to proceed, triggering public consultation if successful later this year, before any change was finalised.

Dr Bidrose would also discuss with the ORC the possibility of forming a joint working party to oversee development of the regional public transport plan, councillors decided.