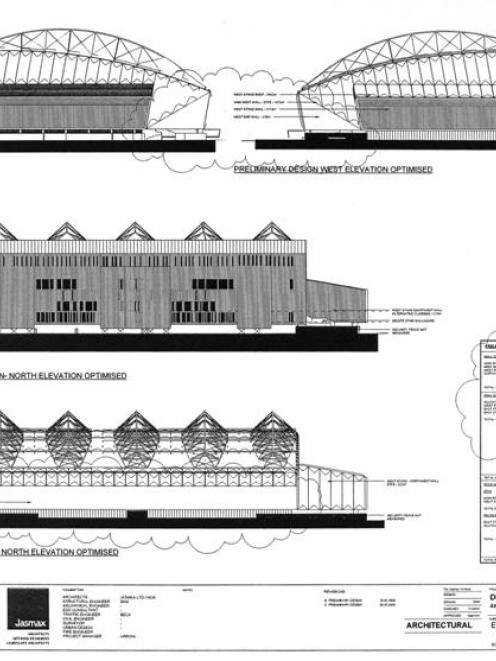 Stadium plans.
The next stage of multimillion-dollar spending on the Awatea St stadium project - payment for the purchase of land at the site - has begun.

The Dunedin City Council announced yesterday it had approved deposits on the leases and land for the project.

Five purchases had occurred on July 31, with the rest of the settlements to be on October 31 this year, and October 31 next year.

The gross cost of the purchase of freehold land, buying out leases, severing tenancies and relocating businesses was $32.5 million.

That is above the original $20 million budget for the land, but Carisbrook Stadium Trust chairman Malcolm Farry said the sale of surplus land bought should make up or better the difference.

The trust would also make money from materials when it demolished buildings on the site.

"Depending on how much surplus land we're selling, we're expecting to get below the figure we budgeted for."

Mr Farry confirmed the purchases meant the council was providing more money, on top of the $11.5 million the trust had already been granted.

Council chief executive Jim Harland said in January almost $44 million would be spent this financial year, if the project went ahead.

Mayor Peter Chin said about two-thirds of the land would be used directly for the stadium, while the other third would be for the University of Otago's building on the site, plaza space and realignment of State Highway 88.

While some purchases had already been made, "it's just taken us till this time to tell you all about it", he said.

Asked whether the final settlements on some of the land meant the project could not be built in time for the Rugby World Cup, he said the project was still on track for the event, though there were other conditions that needed to be satisfied before building began.

Stop the Stadium president Bev Butler said the news was "nothing to celebrate".

Ms Butler said it was more money being wasted, as she did not believe the stadium could be built for $188 million, and the project would not go ahead.

Mr Farry said if the stadium did not go ahead, the land would provide the council with "a huge opportunity", as having such a large site owned by one organisation would increase its value dramatically.

"If it doesn't go ahead, it's a great business deal."

Mr Farry said most of the work to organise the relocation of businesses in Awatea St had been completed.

Sites had been found for businesses across the city, rather than all in one area.

Depending on where they were on the site, some businesses could stay until April or May next year.

His personal view was some of the land should be kept for stadium-related developments.

One suggestion had been an athletes' pool next to the facility.

"If we don't have that land, people can't come to us with those thoughts and enhance things for the city."

Private sector fund-raising for the stadium was still about 30% of the $55.5 million total, and there would be "intense work" in the next four months, though he did not want to say what sort of work until he was sure it would go ahead.

The funding - promised, but not yet money in the bank - came from corporate boxes, seating packages, and sponsorship.