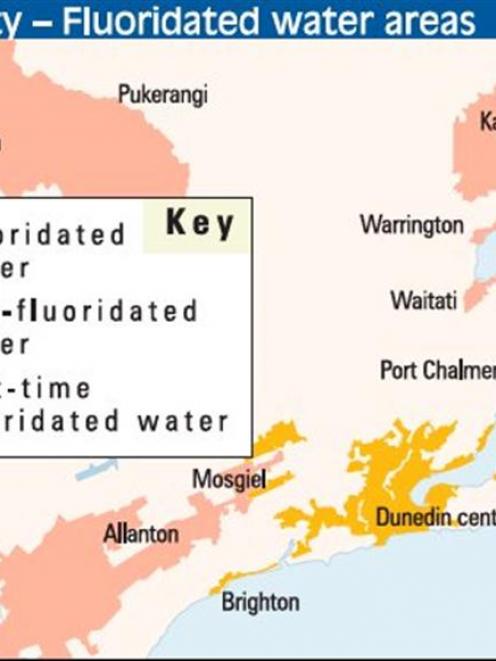 The chemical, which is mixed with water to improve dental health, is added to reservoirs supplying 85% of the city's reticulated water.

But there were howls of outrage yesterday when the council's infrastructure services committee discussed extending fluoride use to Waikouaiti, Mosgiel, Outram, West Taieri and Rocklands.

The scientific evidence supporting it was "heavy and compelling", and those who opposed the use were "akin to quacks and snake oil merchants", he said.

The community should be consulted but any talk of city-wide or local referendums should be shelved, he said.

"It's not about running off to referendums when the going gets tough."

Cr Fliss Butcher disagreed, arguing the issue was about "personal choice" and the ability to reject "mass medication" by "men in white coats".

"I'm sure you will remember thalidomide," she said.

"Sometimes men in white coats get it wrong. That's what Hitler used it for in the gas camps and the people that pulled the levers said they were following orders."

His call to reject Cr Butcher's "anti-fluoridation diatribe" offended her , but she was not successful in demanding an apology.

Both viewpoints were discussed in yesterday's report, but Mr McCombie warned council staff were not qualified to judge the relative merits.

Councillors would have to make a "fundamental decision" about which side's argument was "the most credible", he said.

The Ministry of Health "quite firmly" supported fluoridation to improve oral health, and Public Health South officials argued the "considerable" health benefits outweighed the "minimal risk of harm from side effects".

However, Fluoride Action Network argued benefits were "at best dubious" and the risk of side effects "considerable", Mr McCombie said.

Instead, fluoridation will continue until the next round of annual plan and long-term council community plan (LTCCP) hearings, which will allow for public input before a final decision to extend reticulation is made.

Yesterday's decisions will also be discussed at the next council meeting on November 3.

• Fluoride is a naturally-occurring chemical found in fresh and salt water, plants, foods, dental enamel and bones, and plants.

• Adding fluoride to drinking water, at between 0.7 and 1 part per million, reduces tooth decay in natural teeth.