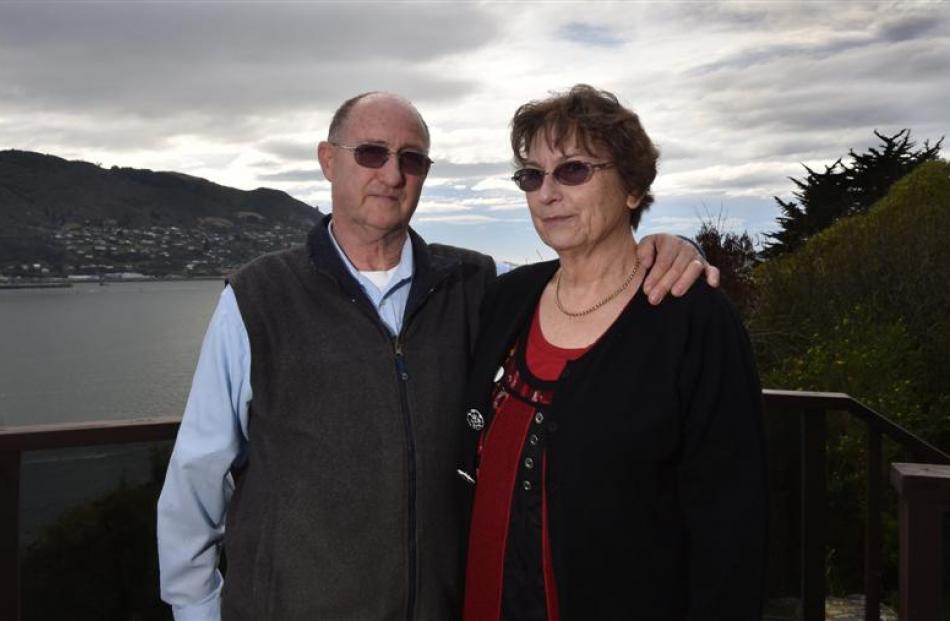 Steve and Lorraine Hawkins say the Dunedin City Council is responsible for stormwater flooding through their Otago Peninsula property. Photo by Gregor Richardson. 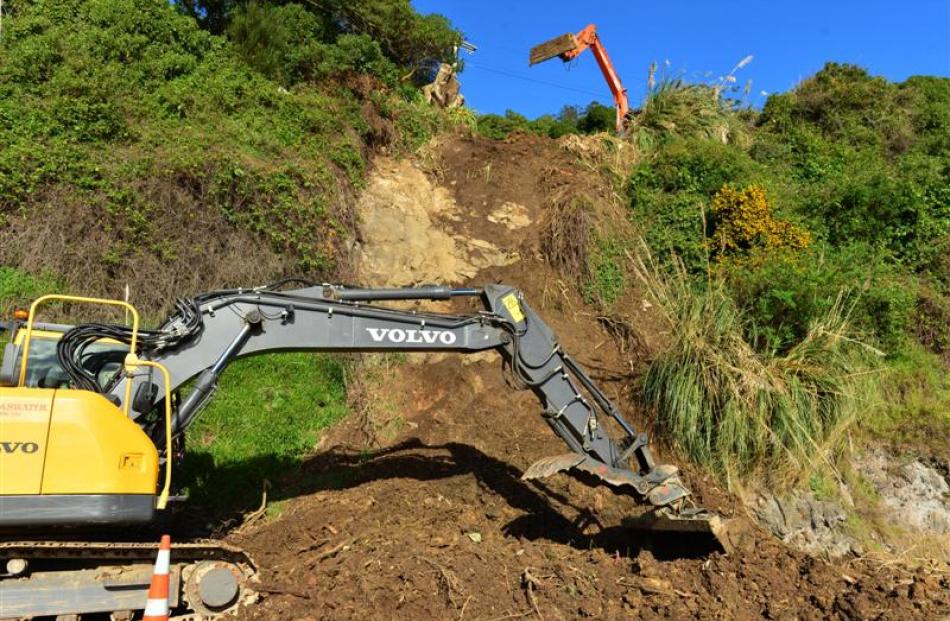 Excavators clear debris from above Portobello Rd after a slip below the Hawkins' home in 2013. Photo by Peter McIntosh.

Otago Peninsula couple Steve and Lorraine Hawkins fear the worst whenever it starts to rain.

For them, the noise is not the relaxing patter of raindrops on the roof - it is an alarm bell, warning of what is to come.

It means the small creek cutting down through their steeply sloping property, and passing within metres of their home, is about to transform itself from a quiet trickle into a torrent.

It is a torrent capable of carrying 722 litres of water a second - or 43 tonnes a minute - from the hill above them to Otago Harbour below.

But it is also capable of breaking its banks, shunting aside boulders, stripping away their gravel driveway and even the land itself, sending slips and debris crashing down.

One major slip in 2011 has already inundated Portobello Rd, while a second took out driveway access to two neighbouring homes in mid 2013.

Now Mr Hawkins fears a third might be forming above the couple's three car garage, next to their house, placing it under direct threat.

''We have been having sleepless nights whenever it rains.''

But live with it the couple have, while engaged in a bitter three year dispute with the Dunedin City Council.

The couple claimed the council was responsible for the torrent - and the problems it caused - having signed off on Waverley subdivisions on the hill above their home.

That had allowed the number of houses above them to almost double, to 74, since the late 1980s.

The result had been more water running off driveways and other hard surfaces into the council's stormwater network, they said.

And the catchment covering all 74 homes emptied out at the same point - the top of the creek that then cut down through their property.

When it rained, the couple could hear the torrent coming down the hill before it arrived - a video shot by Mrs Hawkins captured the moment the trickle becomes a flood.

But talks with the council aimed at reaching a solution have dragged on since 2012, only to reach an impasse and stall.

Mr Hawkins said council staff had ignored warnings and denied responsibility, heaped costly requests for further information on the couple, and blamed them for damage caused.

Their property's land information memorandum (LIM) has also been updated to reflect the flooding and land instability problems, which - although a legal requirement - made their land unsellable, Mr Hawkins said.

When the second slip, in mid 2013, took out neighbours' driveways, council staff told upset residents to speak to the Hawkins.

They did - resulting in an angry encounter, threats aimed at Mr Hawkins and the intervention of police, Mrs Hawkins said.

Mr Hawkins was also taken to the Small Claims Court, but the case was eventually thrown out, he said.

One of the slips had also taken out a tree and threatened a power pole, resulting in its replacement by Delta workers earlier this year.

Two new poles were installed instead, but continuing land instability meant one was already starting to lean over, he said.

The torrent of water spilling on to Portobello Rd may also have contributed to a car crash in 2013, when a motorist encountered ''a wall of water and rocks'' and aquaplaned into oncoming traffic, he said.

It had also repeatedly turned the coastline below their home a muddy brown colour, as silt was washed down the hill and into Otago Harbour.

But, despite the difficulties, repeated talks with council staff had been fruitless, Mr Hawkins said.

''They make mumbly buzz noises and then they just go away,'' he said.

The impasse eventually resulted in the intervention of Dunedin Mayor Dave Cull, who in November last year wrote to the couple to acknowledge their ''difficult and stressful situation''.

He also offered - without prejudice - to recommend the council's purchase of their property as ''the best outcome for both yourselves and for the city'', and compensate them for expenses incurred to date.

But the offer struck another impasse when the parties failed to agree on a valuation for the Hawkins' property.

Mrs Hawkins said theirs came in at $1.12 million, which covered their property, home and land that was consented - but not yet titled - to be subdivided into two further sections.

The council's originally came in at $620,000, but was later lifted to $680,000 - a valuation Mr Hawkins said remained fundamentally flawed.

The result had been three years of stress, as meetings were held and lawyers and consultants on both sides fired off reports and pointed fingers.

Council water and waste group manager Laura McElhone, in a letter to the couple in 2013, blamed the problems on climate change - citing an increase in rainfall intensity of ''as much as'' 82%.

She also maintained the ''principle of natural servitude'' applied - the requirement for lower lying landholders to accept water coming from higher ground.

The Hawkins disputed that, and commissioned a report by Tonkin and Taylor in 2013 which found increases in peak stormwater flows through their property were due ''purely to suburban development'' upstream.

It warned against further development in the area, which could ''further exacerbate'' existing problems.

A report by Opus International Consultants, commissioned by the council the following year, also acknowledged stormwater problems in the area, including on the Hawkins' property.

It said the problems were ''potentially contributing to land instability and flooding'' on Portobello Rd, and recommended one of three possible engineering solutions - costing between $540,000 and $720,000 - be considered.

The council had eventually ruled out the projects in favour of a purchase, but the lack of progress left the Hawkins feeling bullied and not knowing which way to turn next.

Mr Hawkins (67) and Mrs Hawkins (66) had planned to stay on at the property for another decade, before subdividing and selling to help fund their retirement.

Now they faced an uncertain future - too old to start again, but with no choice but to leave.

''We love it here, but we have got to the point where we don't love it any more, because of what we have had to put up with,'' Mrs Hawkins said.

Mr Cull, contacted by the Otago Daily Times, insisted the council had gone to ''exhaustive'' efforts to resolve the couple's concerns - including the offer to buy them out - without success.

The council agreed there were ''issues'' to do with stormwater on their property, but did not accept liability for them, he said.

Whether or not stormwater volumes had increased, they were being lawfully discharged into a natural watercourse, he said.

''More water may be going into it for various reasons ... it may be climate change for all I know.

''While we accept the runoff from the subdivisions may be a contributing factor, we don't accept liability for it.''

The couple also had to accept some responsibility, having carried out work on their property which had contributed to the problems, he said.

The ODT asked council staff to respond to questions about the problems at 240 Portobello Rd, including their handling of the Hawkins' complaints.

Ms McElhone did not return a call, while council city property manager Kevin Taylor, who has been handling the matter for the council, would not discuss the details when contacted this week.

Neither would council group chief financial officer Grant McKenzie, who would only say - in a written statement - the council had been trying to resolve matters with the couple ''for a number of years''.

That included an offer to enter arbitration two weeks ago, which Mr Hawkins was yet to respond to, he said.

''For legal reasons we are unable to comment any further while awaiting his response to our offer of arbitration.''

Mr Cull was prepared to go further, and defended the efforts of council staff, but said he became involved in an attempt to resolve the ''impasse''.

The offer to buy the couple's property at ''fair value'' remained, with the exact process - and the price - able to be negotiated during arbitration, he said.

''That would appear, to us, to be the fairest way forward for everybody.