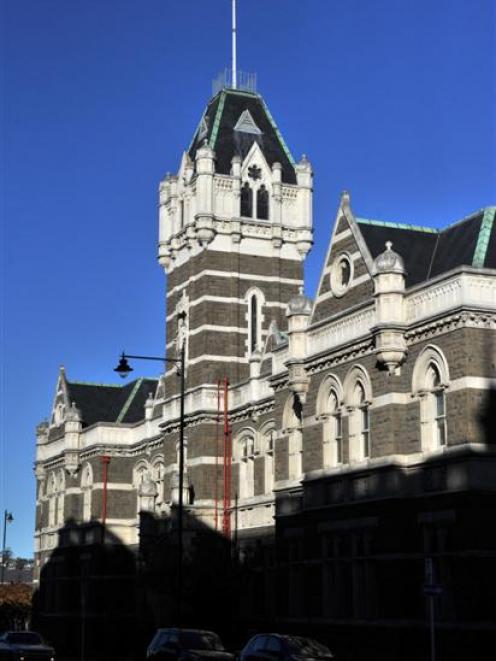 Photo by Linda Robertson.
The Ministry of Justice has released ministerial briefing documents about the Dunedin courthouse in lower Stuart St, but has blanked out parts that might explain why earthquake strengthening has been delayed.

The ministry has been tight lipped about the courthouse, which has been mothballed indefinitely. In a visit to Dunedin last week, Justice Minister Amy Adams could give no guarantees on its future.

Ministry officials dispute the fact the project is delayed, but in August 2013, then courts minister Chester Burrows said the ''top priority'' project would require the closure of the courthouse for an ''estimated two years''.

Key parts of briefing documents to Ms Adams about the courthouse, released under the Official Information Act last week, have been blanked out, the ministry citing confidentiality of advice to ministers.

The Otago Daily Times has complained to the Office of the Ombudsman. One document acknowledges new earthquake rules announced last month by Building and Housing Minister Dr Nick Smith meant the courthouse would not need to be strengthened for 35 years.

''This does not take away from the issues the ministry faces with the building,'' the document said.

''The ministry continues to have concerns that, without some remediation, the tower and some other parts of the building continue to pose a risk to court users and occupants.

''Although the ministry is not aware of any current operational issues in Dunedin, the ministry is aware of concern from the judiciary and the local branch of the Law Society that the Stuart St building may not be strengthened,'' the minister was told.

Papers also show the ''Dunedin Court premises'' was one of the items on the agenda of a May 21 meeting with Dunedin based National MP Michael Woodhouse.

The Ministry of Justice partially closed the building in late 2011, and shifted out completely last month to a temporary facility in High St.