Whanganui-based artist Simon Ormerod, also known as Cracked Ink, was brought to Dunedin to apply his accessible art - and an environmental focus - to the 11.5m by 19m wall on the side of the former Donald Stuart building in Bond St last Sunday.

Dunedin Street Art member Justin Cashell said Ormerod's enthusiasm for coming to Dunedin - to add to the city's collection of more than 50 murals - was "really humbling''.

But his work for Sea Walls: Artists for Oceans, a public art programme that has completed more than 350 murals in 15 countries, made his work a perfect fit for the aspirations of the building's owners.

"We thought it was a win-win for everybody - and the people of Dunedin,"Mr Cashell said. 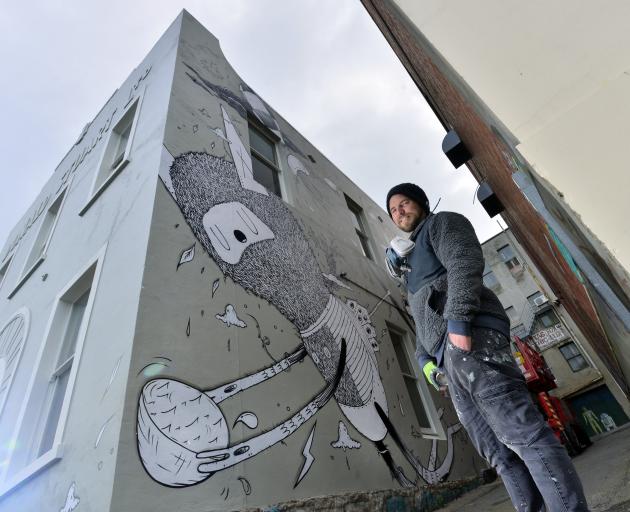 Artist Simon Ormerod, also known as Cracked Ink, is working on a large addition to Dunedin’s street art collection on the side of the former Donald Stuart building in Bond St. PHOTO: GERARD O’BRIEN

Ormerod, who is originally from the United Kingdom, has spent the past 15 years painting in New Zealand - Cracked Ink's highly recognisable style is apparent in murals in cities across the country as well as internationally.

After completing murals in Hawaii and Mexico earlier this year, he was keen to head to the southern city, Ormerod said.

"Dunedin was the last major place I had to paint in New Zealand - which was kind of cool. I kind of 'tick it off'. I get to work. I get to do something I really want to do,"he said.

"I wanted to be here, put it that way - I was just waiting for the right kind of chance, just the right wall as well. Because I want to paint big walls.''

Some of his favourite artists, including Pixel Pancho, of Italy, and Phlegm, of the United Kingdom, had already worked in the city.

And armed with roughly 30 cans of aerosol - he expected to complete his addition to the Dunedin street art collection tomorrow.