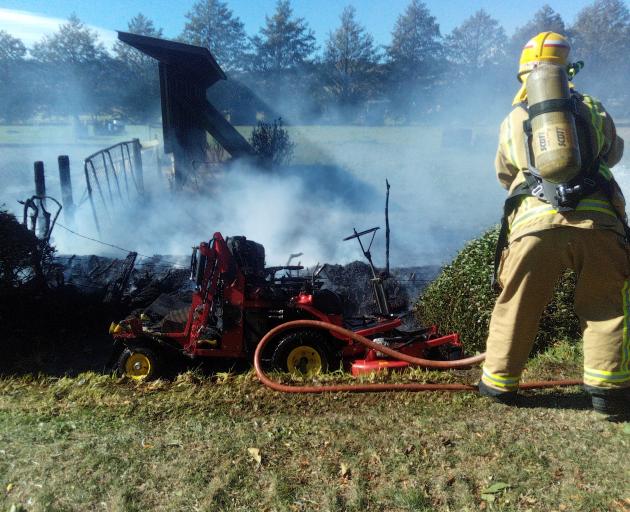 Temperatures climbed, callouts mounted, and with helicopters grounded due to the high winds, firefighters were spread thinly.

At yesterday’s peak, 37 fire appliances and tankers were involved in the fight across the South at the same time as blazes spread rapidly in near-perfect conditions.

Fire and Emergency New Zealand (Fenz) activated its regional co-ordination centre in Dunedin to monitor the unfolding situation as major fires burned from the Mackenzie Country to the Southland plains.

On-call region 5 commander Keith McIntosh said fire permits had been suspended across Otago, and people should not even think about lighting new fires under the current conditions.

Pauline Cara, of Christchurch, pushes her bicycle along the Andersons Bay causeway as high winds blow high tide waters across the road yesterday.
If the situation had escalated further and fire crews became overextended, it could have compromised their responses to crashes on roads in the South, he said.

"We just didn’t know where the day was going to go," Mr McIntosh said.

Crews were called from as far away as Kakanui, about 80km north, to help control the spread of a fire in pine and macrocarpa trees in Ramrock Rd at Bucklands Crossing, Otago rural fire district deputy principal rural fire officer Mike Harrison said.

When the first crews arrived at the fire about 11.30am they found it had already damaged one building and was spreading to shearers’ quarters.

Crews attacked the fire and stopped it from damaging the shearers’ quarters, but the outbuilding was destroyed, Mr Harrison said.

It was only the phenomenal effort of crews from Waikouaiti, Palmerston, Wakari, Waitaki, and Kakanui that kept the fire to only about 1ha, he said.

Firefighters with 11 appliances and support vehicles battled the blaze for five hours before the winds allowed helicopters to get into the air to knock the fire down about 4.30pm.

A crew would remain at the fire overnight and another would return in the morning to mop up, he said. 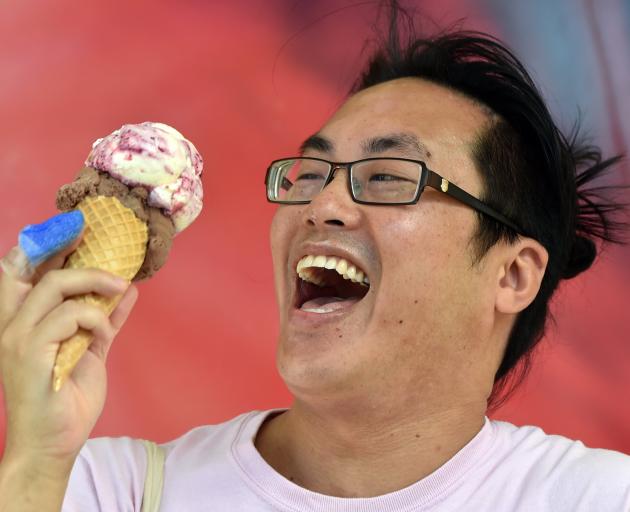 Andy Wong, of Dunedin, has an ice cream from the Rob Roy Dairy to keep cool in temperatures nearing 28degC yesterday. PHOTOS: PETER MCINTOSH
At 2.30pm crews were fighting three different fires in Southland, two within 5km of each other in the Waimea Valley, and another near Dacre.

Assistant Area Commander Deane Chalmers said the fire in the Waimea Valley was reported in a hedge at 8am and because of the wind, rapidly spread along the roadside to a hay barn and deer yards.

The property was saved, he said.

Power lines arcing together were believed to have caused the fire.

As the site was being dampened down at 2pm, crews were redeployed to a second fire about 5km away.

That fire started in a pile of forestry slash and was moving uphill towards a small forestry plantation.

By 3pm conditions were beginning to improve; with higher humidity and easing winds crews contained the fire within a cordon, he said.

The fire near Dacre was reported just after 1pm and burned a hedge and hay bales.

Three properties were under threat near Fairlie, in South Canterbury, as crews from five rural and four urban brigades fought a fire in a forestry plantation that started about noon, Deputy Principal Rural Fire Officer Ray Gardner said.

The fire began in an area of forestry operations and began to spread to standing trees, but efforts to prevent it continuing to spread were successful.

Near Owaka, two helicopters and four ground crews fought a fire that reignited from a previous rural burnoff.

By 6pm, that fire was under the control of the Department of Conservation, Mr McIntosh said.

In Dunedin, the temperature reached 27.8degC about 1pm yesterday — the fourth-hottest April temperature on record since 1972.

Winds gusted to between 96kmh and 106kmh around the city.

Winds gusted to 178kmh at Southwest Cape (Stewart Island); 174kmh at Mid Dome, in Central Southland; and 117kmh in Gore.

Any winds above 118kmh are considered similar to the strength of hurricane winds.

MetService forecaster Aidan Pyselman said the heat and high winds were caused by a strong west-to-northwest flow over the country yesterday, and a weak front which moved northeast over the South Island and lower North Island.

The westerlies were expected to weaken today, and a ridge of high pressure was forecast to spread over the country tomorrow and Wednesday.

However, the strong hot winds were expected to continue in Dunedin, Oamaru, Alexandra, Queenstown and Wanaka today, before those centres became fine and sunny for the remainder of the week.