Bid to rob band of money thwarted by dog 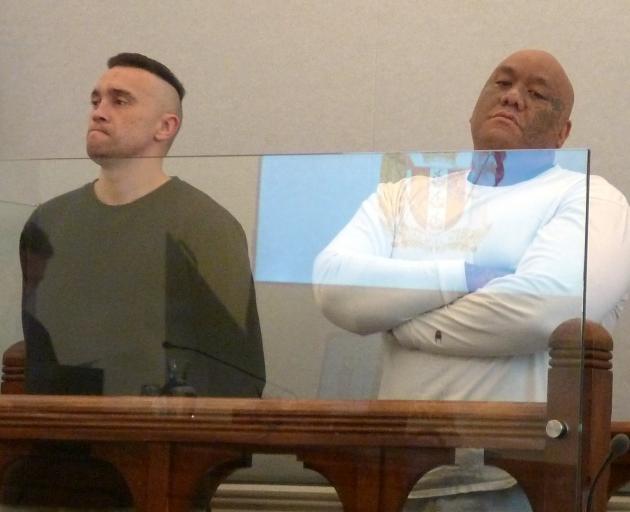 Samuel Cook (left) and Boycee Karetu pleaded guilty to conspiring to commit an aggravated robbery. PHOTO: STAFF PHOTOGRAPHER
Two would-be robbers who went to great lengths to rip off a travelling band were thwarted by an aggressive dog, a court has heard.

A group of travelling buskers arrived in Dunedin on May 8 after a "very successful" tour of the South Island during which they had accumulated several thousand dollars.

The cash was secured in a van at the end of each day.

Samuel Terrence Cook (28) knew one of the musicians and was offered a day's work with the group while they played.

When he was paid, he realised how flush with cash they were, the Dunedin District Court heard this week.

Aggrieved with how little he received for his assistance, Cook hatched a plan to even the score.

What happened next resulted in him being sentenced to eight months' home detention, while his mate Boycee Linton Junior Karetu (32) - who became involved later - was jailed for 21 months.

On May 20, Cook was travelling with one of the musicians, when Cook instructed him to stop to pick up Karetu.

It soon became clear to the victim that the pair's intentions were nefarious.

He was instructed to drive around the city in search of the van in which the money was stashed.

For four hours they scoured the streets and the defendants discussed how they were going to get their hands on the funds.

"They discussed tying up the occupant of the vehicle, storing the cash and assaulting the other group member if she became involved," a police summary said.

They also considered stealing the van.

But when they finally came across it at Vauxhall Yacht Club, both plans were abandoned.

Cook pulled clothing over his face and prepared to enter the vehicle, when he was confronted by a large aggressive dog.

Karetu berated him for his failures and the victim was directed to drive to Karetu's home, where he picked up a bandanna and gloves.

They returned to the yacht club where Cook, donning the items, again went for the money but was deterred, once again, by the dog.

The defendants followed the van to the Moana Pool car park, where the victim managed to escape and raise the alarm with staff.

Cook and Karetu walked away empty-handed and both pleaded guilty to conspiring to commit aggravated robbery.

Crown prosecutor Craig Power called it "a determined and persistent conspiracy" and Judge John Macdonald agreed the men were persistent in their efforts.

However, he also highlighted "a certain bungling aspect to the offending".

Karetu's counsel, Alex Bligh, said her client had cut his gang ties and wanted to attend a residential rehabilitation programme.

Cook was sentenced to home detention "by a narrow margin" and Judge Macdonald noted he had spent two months in custody awaiting sentencing.