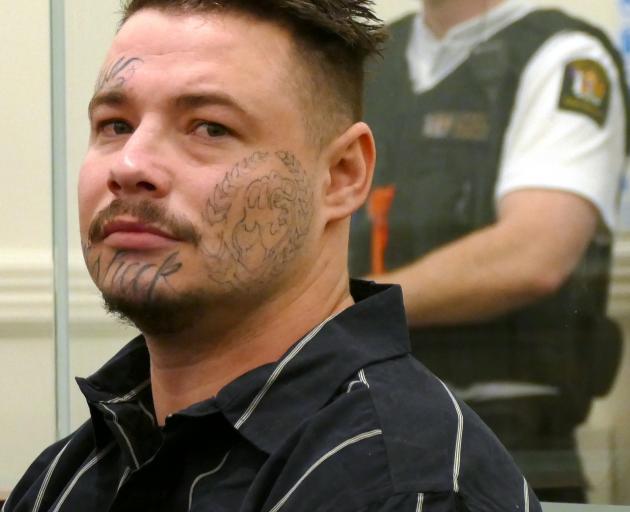 Nicholas Newton (32) has amassed more than 70 convictions during his criminal career. PHOTO: ROB KIDD
A man who abruptly ended a crime spree by accidentally shooting himself with a sawn-off shotgun has been jailed for three years one month.

Nicholas James Newton (32) appeared in the Dunedin District Court yesterday afternoon after pleading guilty to aggravated robbery, possession of a firearm and unlawfully getting into a vehicle — offences he committed while on parole.

The defendant will serve the entire sentence without parole since the offending represented his second strike.

The spree began in Dunedin on the eve of the nationwide Covid-19 lockdown on March 23 last year when Newton, Dakia Henare and another man were driving in a stolen Subaru in Kaikorai Valley Rd.

At a service station, one of the men ensured the entrance was clear and Newton — wearing a hat, hood, sunglasses and gloves — entered wielding a sawn-off shotgun and pointed it at the sole attendant behind the counter.

Counsel Sarah Saunderson-Warner said her client’s actions were clearly driven by his addiction to methamphetamine.

Two days later, Tyrone Henare with two unidentified associates travelled to Factory Rd in Mosgiel in another stolen Subaru where they carried out a ram-raid.

On April 2, just days into the lockdown, Newton was dropped off by the Henare brothers outside the Dunedin Hospital with a shotgun wound to his chest.

He told medical staff it had ‘‘gone off’’ while he was removing it from the boot.

The Henares’ getaway was foiled when they ignored a red light and slammed into a bus.

They fled on foot and threw the sawn-off shotgun on to a roof but were soon tracked down by a police dog.

Newton started using cannabis at the age of 9 and first tried methamphetamine at 15.

Judge Turner accepted the defendant experienced a traumatic upbringing which featured an early introduction to gangs and a lack of positive role models.

However, he measured that against Newton’s ‘‘extensive and appalling history of criminal behaviour’’.

Among more than 70 previous convictions were 10 for burglary and a multitude of dishonesty offences and violence, the judge said.

Newton was assessed as a high risk of reoffending and of harming others.