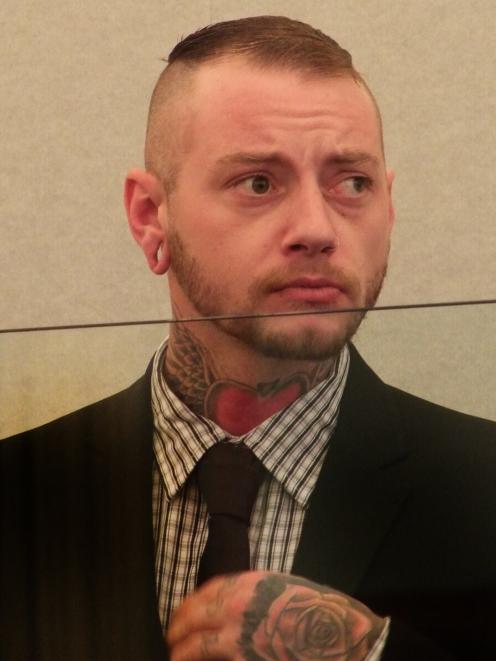 Jesse McConnell (28) has moved to Dunedin since a bungled bank robbery in Christchurch. Photo: Rob Kidd
When Jesse Peter McConnell wanted out of the gang he had become involved with, he agreed to rob a bank.

But when the 28-year-old turned up to a Christchurch Kiwibank branch on December 14 he was not the most forceful bank robber.

When he got to the front he told the teller he needed $3000.

Unaware of his motives, she responded by handing him a withdrawal slip.

She was confused and brought up his account on screen, which showed no funds available.

She then printed it off and showed the defendant.

It was only then she realised there was a criminal element to what was going on.

The quick-thinking teller told McConnell she did not have that amount in her till and would have to go out back to retrieve it.

While out of sight, she told her manager what was going on and police were called.

Back at the counter, the woman tried to calm the man, asking him if he was all right.

''The defendant replied that he just needed $3000 and that he was robbing her,'' court documents said.

As McConnell became more agitated, the teller handed over the $980 in her register.

He immediately passed it to a gang member waiting outside before police arrived, arrested him and recovered the cash.

McConnell met his victim before yesterday's sentencing and explained he had become inadvertently involved with a gang through a friend, which led to his addiction to methamphetamine.

His attempt to disengage resulted in him and his girlfriend effectively being held captive for a fortnight until the bizarre bank job, he said.

McConnell claimed he had orchestrated the scenario by showing the gang members his KiwiSaver account, knowing he would not be able to withdraw the money.

He was hoping to have them caught on CCTV at the bank.

Although the incident resulted in him being charged with and pleading guilty to demanding with menaces, it had allowed him to break his gang connections.

He had since moved to Dunedin, had been treated for his mental health issues and drug use and had been able to focus on employment, the court heard.

Judge Crosbie said he was impressed by the steps McConnell had taken to change the direction of his life in the past eight months.

The facts of the case did not resemble anything he had seen before the court during his career, he said.