By Rob Kidd
0 Comments
A Dunedin man who breached lockdown when he “got pissed tried driving home and f..... up” has a $3200 bill to pay.

Defence counsel Liam Collins said his client was under no illusions and knew he and his passenger could have died in the high-speed, booze-fuelled smash on August 29.

Gosney was travelling at more than 100kmh in Princes St, when he lost control of his Ford Falcon near the intersection at The Exchange.

When he collided with a lighting pole, the impact was such that it was ripped out of the ground.

His mate, who suffered a bruised foot, scarpered but Gosney remained at the scene until police arrived. 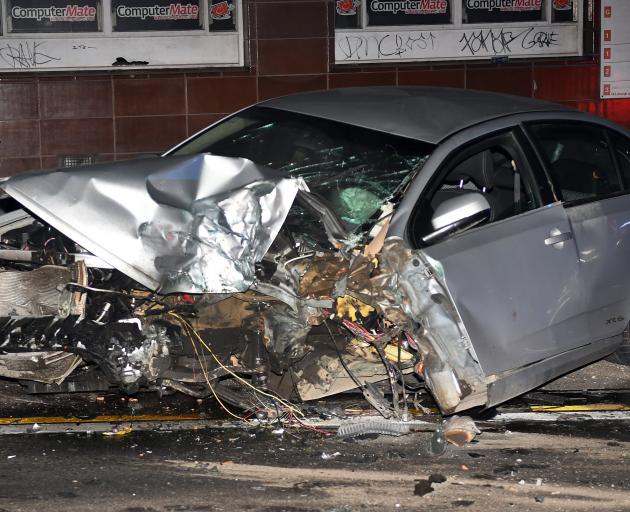 Shae Gosney’s vehicle was written off in the high-speed crash in Princes St. PHOTO: STEPHEN JAQUIERY
Mr Collins accepted it was an “incredibly high reading”.

He said his client, who had no previous convictions, was locked down with his partner for the first time, when “stress got the better of him”.

Gosney’s frank explanation put it most succinctly, he said.

Gosney had neither consumed alcohol nor driven since the incident and had taken action to address the root of the offending, Mr Collins said.

He had been referred to a counsellor and been prescribed medication for his mental health issues in recent weeks, the court heard.

Gosney was weeks away from completing a two-year automotive engineering course and Judge Peter Rollo accepted the inevitable driving disqualification would have a severe impact on his job prospects.

“This was the reaction of a young person, completely inappropriately, to the lockdown regime, but ... you were not going across borders or anything of that nature. You had someone from outside your bubble with you — that’s a factor that’s of some concern,” the judge said.

Gosney was sentenced to 100 hours’ community work and ordered to pay Aurora $3259 for the destroyed pole.

He was banned from driving for 28 days before the alcohol-interlock licence provisions start.

Judge Rollo urged the defendant to use the fiasco as “a learning experience”.