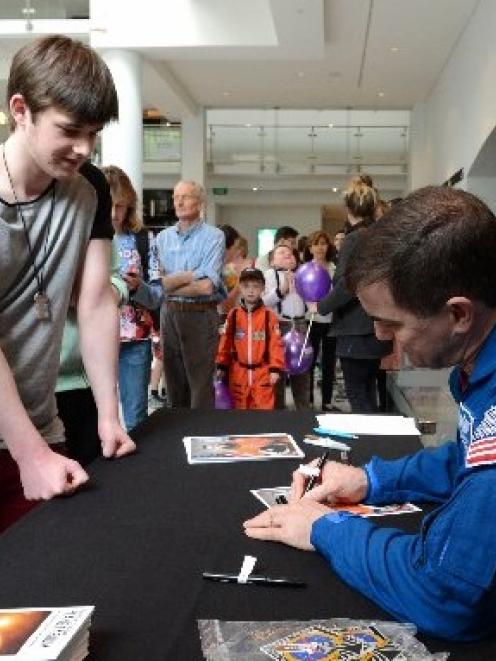 Harrison said it was ''cool'' to meet his first astronaut.

''We're nerds,'' he explained, gesturing at his family members who had met Col Walheim along with him.

He had asked Col Walheim what it was like to see Earth from space.

''I can imagine it being beautiful,'' he said, ''but you wouldn't know until you see it.''

Col Walheim had responded the view was beautiful, but impossible to appreciate ''until you're relaxed'', Harrison said.

Harrison said it was a view he would love to experience first hand.

Col Walheim was in Dunedin on Friday night to open the museum's $1 million planetarium, and later signed more than 200 Nasa photographs of him wearing a space suit, on Saturday.

He yesterday praised the state-of-the-art planetarium and the nearby Beautiful Science area.

''I think it's going to be great for inspiring young people,'' he said.

The veteran of three space shuttle flights, including the last space shuttle mission in 2011, gave an illustrated talk to more than 400 people yesterday on ''The Adventure of Spaceflight: the Final Space Shuttle Mission and Beyond''.