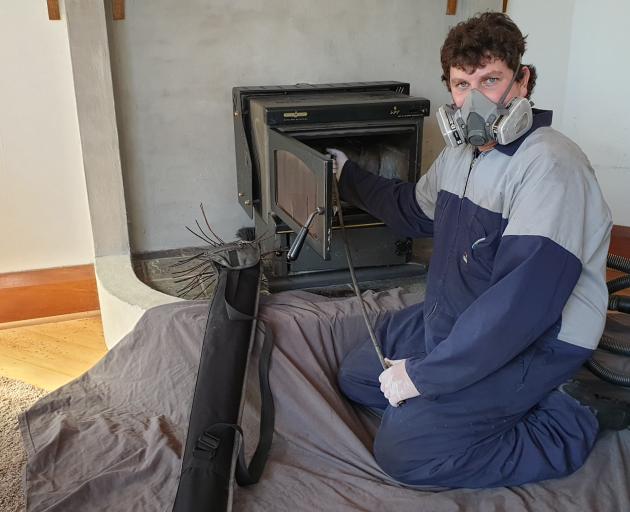 Extreme Clean Chimney Clean founder Jay McPhee out on a job this week. PHOTO: SUPPLIED
A blackberry bush is not commonly grown in a chimney, but the unusual growing space was the cause of a chimney fire in the South recently.

Fire and Emergency New Zealand community engagement adviser Sally Chesterfield said it was important to check your chimney before lighting — especially if you had not used it recently.

"We’ve had two chimney fires in the South lately ... a bird’s nest and a blackberry growing in another.

"If you haven’t used your fire in a number of years, don’t unless it’s been checked."

However, when asked if chimney sweeps were an essential service during the Covid-19 shutdown, Ms Chesterfield was unable to clarify.

Extreme Clean Chimney Clean founder Jay McPhee, of Dunedin, said he was not allowed to work unless it was to provide a service to prevent a safety hazard.

Following that advice, he would triage clients as to how and where he would work.

"What I’ve done is gone through my client base that have chimneys and said, ‘‘Is it an essential service for you? Is your fire smoking, is it not running properly, has it been more than a year?’ and got that information back and weeded out 300 jobs down to 20."

He said the process he put in place when at a job was "more stringent than going to the supermarket", and was devised more than a week before lockdown.

It included no face-to-face communication with clients, all furniture to be moved beforehand and no repair work.

"If the fire requires a repair to make it safe, then no, the fire can’t be used."

While most of his customers said their fire would not be used until he looked at it, others might not be in a position to wait, and might not be able to see signs of issues.

He said it could be less obvious in some cases, such as open fires.

"In those situations it will show no signs. They’ll just go and go and go, and then ‘‘whoomp’’, up in a chimney fire.

"I’d love to see no chimney fires, but I suspect when winter really starts to bite, it will force those people to light that fire."