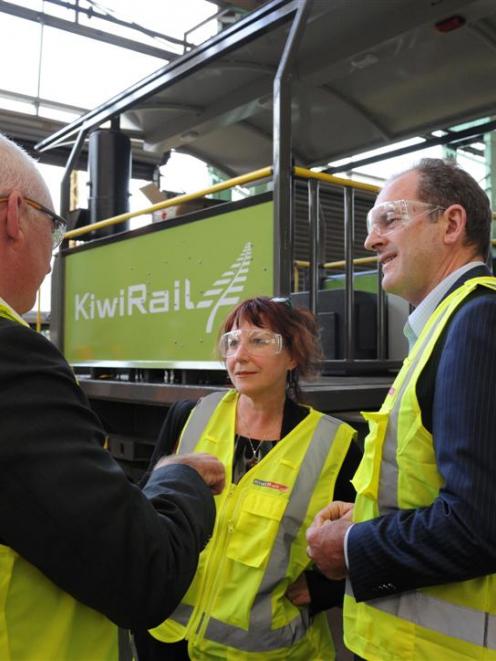 Labour leader David Shearer visits Hillside workshops on Monday. Photo by Craig Baxter.
Labour Party leader David Shearer has called for a bit of "patriotism" to save New Zealand's manufacturing industry, and a Dunedin businessman said if Hillside closed, it would be the end of certain subcontracting work in Dunedin, and a "crying shame" for the city.

Mr Shearer toured the South Dunedin KiwiRail facility yesterday and told about 50 workers he supported them 100%.

He said in the past few years New Zealand had lost 25,000 jobs in the manufacturing industry, and each represented a further two or three workers indirectly affected.

"We need a bit of patriotism in New Zealand around our manufacturing sector, to make sure those jobs stay in New Zealand rather than go across the Ditch to Australia," he said.

Mr Shearer said Hillside was unique in the South Island, with its heavy lifting capability, and an asset the Government could not afford to lose.

"You would be absolutely crazy to let this go. To us it's a no-brainer, quite frankly," he said.

Farra Engineering chief executive John Whitaker said his company, like many Dunedin-based engineering and manufacturing businesses, would not be able to fill the subcontracting void left by Hillside Engineering Workshops if its operation ceased.

Although he did not think local firms were vulnerable to collapse in the case of Hillside's closure, Mr Whitaker said it would be a blow to the industry and wider economy.

"I share everyone else's view that it would be a crying shame for the city.

"Clearly, it would mean a loss of jobs, employment and economic activity, and the breadth of skills there are very good."

"The subcontracting work we do is rail-aligned, so if they closed, we would lose that work completely. We couldn't go anywhere else. In terms of trying to replace that work, it's just an ongoing battle to keep enough work and keep everyone busy as it is," Mr Whitaker said.

Hillside was important to Farra, but not critical.

"And I suspect that's the case elsewhere," he said.

Mr Shearer was not able to shed any light on Hillside's potential sale or closure, but said under Labour's procurement policy, the workshops and other New Zealand manufacturing firms would be given priority.

"The guys inside are hopeful there's a buyer out there," he said.

The union rejected the proposed closure of Hillside if it failed to sell.