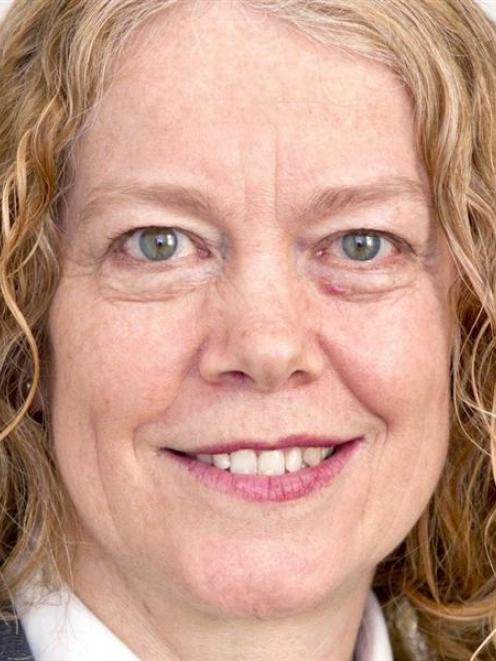 Hilary Calvert.
Claims of undue influence over a panel to shape Dunedin's future have been levelled against Dunedin Mayor Dave Cull.

However, the allegations by Crs Hilary Calvert and Lee Vandervis have been denied by Mr Cull, who hit back by accusing them of a ''lamentable lack of understanding'' of council processes.

The claims came a day after Crs Calvert, Vandervis and Cr Andrew Whiley publicly criticised the ''green tinge'' of the panel appointed to hear public submissions on the second generation district plan (2GP).

The vote was carried without opposition, after Cr Calvert left early and Crs Vandervis and Andrew Whiley failed to vote against it.

But all three criticised the makeup of the panel this week, including Cr Whiley, who worried those selected would ''set the agenda very clearly''.

However, Cr Calvert went further, telling the Otago Daily Times she believed Mr Cull had unduly influenced the makeup of the panel.

The four councillors on the panel had been named in a resolution put forward by Cr Andrew Noone, chairman of the council's hearings committee, to be voted on at last Monday's meeting.

But Cr Calvert claimed the names were put forward by Cr Noone ''at the instruction of the mayor''.

''He apparently recommended, or suggested, this panel.''

That overlooked other councillors' skills, and meant the panel did not represent the broad range of views around the council table.

''Everything that happens on council happens because the same people look at it.

''It's essentially people who tend to be in the same block,'' she said.

Cr Vandervis also expressed concern, telling the ODT the panel comprised the ''mayor's favourites'', and ''seems to have happened behind closed doors''.

Cr Noone, contacted in Vietnam yesterday, denied being told who to appoint, saying recommendations for the panel's membership came after a discussion between himself and Mr Cull.

''We certainly had a discussion, but it was a two-way discussion.''

Mr Cull denied stacking the committee and said the claims cast unfair ''aspersions'' on those chosen.

He had met Cr Noone, and also Cr David Benson-Pope, before last Monday's meeting to discuss potential panel members, and all three had ''reached consensus'' on the nominations put to the council by Cr Noone.

''It's a perfectly appropriate way of dealing with that.''

The council had seven councillors qualified to sit on Resource Management Act (RMA) hearings, but the 2GP hearings were expected to take up to 280 hours, he said.

At the same time, three councillors from those qualified needed to be free to hear run-of-the-mill resource consent hearings, Mr Cull said.

The selection process was based on the mix of experience, skills and qualifications needed for each group - not the individual political leanings of any councillor, he insisted.

''I didn't look at any of the councillors and say to myself `what are their biases? How do I balance this up?' That doesn't even come into it.''

Councillors selected for either role would also be guided by the framework of the RMA, not their own political beliefs, he said.

''It's implying bias to say that people who have got the training to put that to one side and make calls of the basis of predetermined prejudices.''

The panel's selection also came down to a council debate and vote, and ''it's rather odd no-one raised the issue'' at the time, he said.

''They clearly didn't think it was important enough to discuss then. I wonder why they dreamed up objections after the event?''