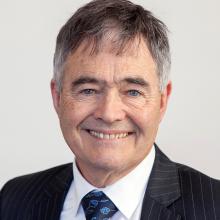 Dave Cull.
Dunedin Mayor Dave Cull is in the running to become the next president of Local Government New Zealand (LGNZ).

Mr Cull’s only competitor for the role is Nelson Mayor Rachel Reese.

The news of his bid came in a letter to the Otago Regional Council in which he asked for support.

A letter from Ms Reese also appears in the council’s agenda, laying out her ambitions for the role.

ORC chairman Stephen Woodhead said this week  he expected the council would give its vote to Mr Cull.

LGNZ represents the national interests of councils in New Zealand.

The organisation provides its members with advocacy and policy services, business support, advice and training.

An LGNZ spokesman said an election would be held at the LGNZ general meeting on July 25, after an annual conference in Auckland, where the two mayors could present their cases.

Mr Cull left for France on Monday night to represent Dunedin at the 11th annual meeting of the Unesco Creative Cities Network.

He and Ms Reese have  begun campaigning.

Mr Cull said in his letter to the ORC he had been mayor, and the metro sector representative of LGNZ since 2010.

Since October last year he had been LGNZ vice-president, and chairman of the metro sector.

He said "localism" needed to be strengthened in New Zealand.

"That’s the principle that decisions should be made closest to where they have effect."

Mr Cull said he had "the support of my home team", having been nominated by deputy mayor Chris Staynes and chief executive Dr Sue Bidrose, but "only after they and my council assured me of their backing with the increased commitments the job would bring".

"I would greatly appreciate your vote."

Ms Reese said in a letter to councils around the country she was nominated by Wellington Mayor Justin Lester and Matamata-Piako Mayor Jan Barnes.

A member of the LGNZ national council, she wanted the sector to have a strong voice and strong partnership with the new Government following the September election.

Mr Woodhead said he and Cr Carmen Hope, both of whom were going to the July 25 meeting,  had been given discretion at the ORC meeting yesterday to vote for the candidate they felt was best.

There was support for Mr Cull, but also concern for the workload, and what that might mean for his role with the city council.

LGNZ chief executive Malcolm Alexander said there was no job description for the role of president.

"It’s a governance role, chief representative and chief media spokesperson for the organisation."

Mr Alexander said anyone who took the role would be "perfectly capable" of doing so and performing their role as an elected member of a council.

There was a team at LGNZ that did the "grunt work" for the organisation, and a 15-member board. The national council met every two to three months.

Most people do not understand the status of the Local Government New Zealand Association. It is an incorporated society and claims to represent the interests of local government in New Zealand. It is a kind of non-statutory union of councils whose primary purpose is arguably to have more clout with central government by strength of numbers. It is extremely powerful in influencing how local government in New Zealand functions and changes. Ratepayers fund it but their interests are in no way directly represented on it. So significant decision-making is being considerably distanced from those most affected in a non-transparent manner. Most of Local Government NZ's activity comprises conferences, trips, dinners and self-congratulatory prize-giving, all undertaken at a fairly high standard of comfort.

Both organisations have 'partners' or sponsors, generally business interests who are active in the local government sector.

Does this mean he will leave Dunedin alone? quoted There was no job description for the role of president unquote. This would suit Cull to a T, can't be wrong will not listen to anybody just what he is doing now.
IMO Cull can't do his current job,

He is out of country so act now DCC and Dunedin have a coup and kick him out clear his office. Act now make a stand.