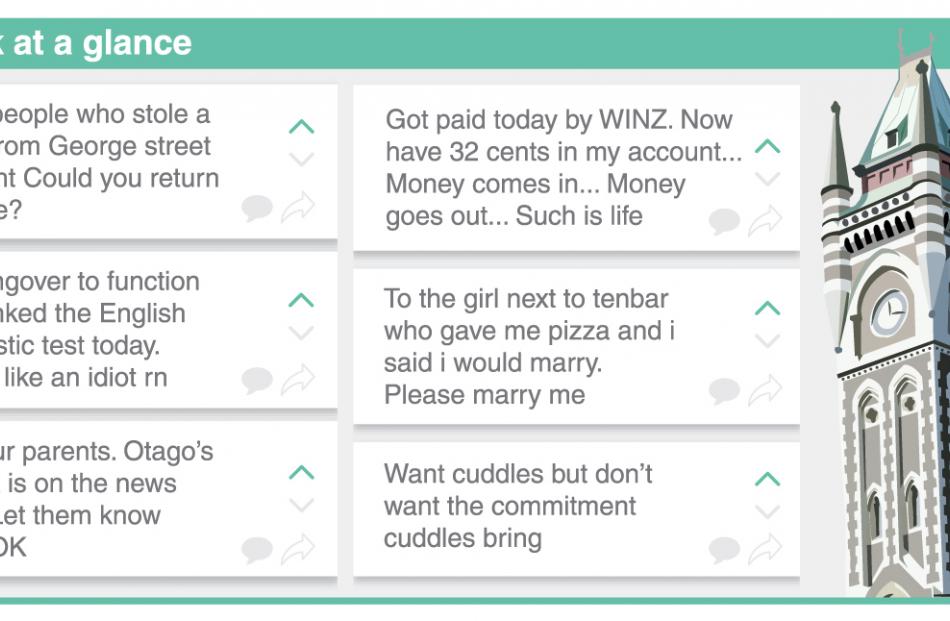 Here is what you need to know about Yik Yak.

It is a smartphone application where anyone can post anonymously about anything. Users can reply to other posts, and upvote or downvote posts or replies they like or dislike.

The posts a user can see are, for the most part, restricted to their immediate location - so, for example, Yik Yak from Mosgiel looks different than Yik Yak from North Dunedin.

And users' posts can only be seen by the people immediately close to them.

Yik Yak is not just for students - anyone can post.

But overwhelmingly, it is students who do, transforming North Dunedin Yik Yak into a kind of microcosm of the student experience.

During the school year, the Yik Yak narrative is dominated by whatever students are thinking about.

When there was a gun threat at the University of Otago last year, Yik Yak was teeming with anxiety and dark humour and swirling rumours.

When exams were stolen from the clocktower building, the conversation was all exam theft, all the time.

And during O Week, there is a lot of O Week-related talk.

But there is also a common theme that peeps through, whatever the conversational flavour of the week is.

And that theme is the most intimate, mundane, and profound thoughts of Dunedin's late-teens-to-early-twenties residents.

Take this post, for example. 1am, Thursday: "Does anyone ever get really down and lonely, and just need someone to talk to''.

Or this one, just minutes before: "Girls are crazy''.

Or this one, at 1am on Tuesday: "To the girl next to tenbar who gave me pizza and I said I would marry. Please marry me''.

Yik Yak posts generally fall into one of a few categories.

There are jokes - sometimes extended ones, like the recent spate of Teletubby-themed posts.

There are public service announcements and public appeals for help.

There are stray, meandering thoughts.

Thursday, 5am: "To the people who stole a couch from George street last night Could you return it please?''

One hour later, a response: "They probably burnt it''.

Thursday, 6am: "Call your parents. Otago's O Week is on the news again. Let them know you're OK''

Thursday, 1pm: "To everyone throwing eggs last night, thanks for the breakfast. Caught a few of them! #freefood''

Thursday, 2pm: "Pooping naked is the most relaxing thing ever''

Then, of course, there are posts about sex and love - wanting it; getting it; needing it; longing for it.

Thursday, 9am: "To the guy in the light blue business shirt I passed on George St this morning, coffee?''

Or, maybe, like this one, from Thursday about 4pm: "The deputy proctor is soo cute!!!''

And then, there are the more subtle, depressive posts.

Posts about loneliness and self-doubt.

Posts about sadness, and feeling left out.

Thursday, 5pm: "Too hungover to function and flunked the English Diagnostic test today. Feeling like an idiot [right now]''

Almost immediately, someone responds: "Were you at toga last night and helped by someone from are you ok? ... I really want to ask this girl I helped if her test went ok''.

The original poster was not the girl who had been helped.

But they respond anyway: "Aww I'm sure most people did fine but if she didn't thank God we get a resit!''

Of course, people are not always nice under the cover of anonymity.

Yik Yak got a bad reputation last year for hosting a series of racist, nasty interactions between users on college campuses in the United States.

And the posts in Dunedin are not always nice.

But, surprisingly, that rarely happens.

They are kind - or, at the very least, not mean.

Not long after the Thursday 1am post, asking if the poster was alone in feeling down and lonely sometimes, someone responded: "I do, too!''

"Literally thought I was the only one,'' the original poster replied.

"Always nice to have someone around x''

The interaction was small, and anonymous.

The posters will probably never meet.

But, from the outside looking in, it felt like it meant something.