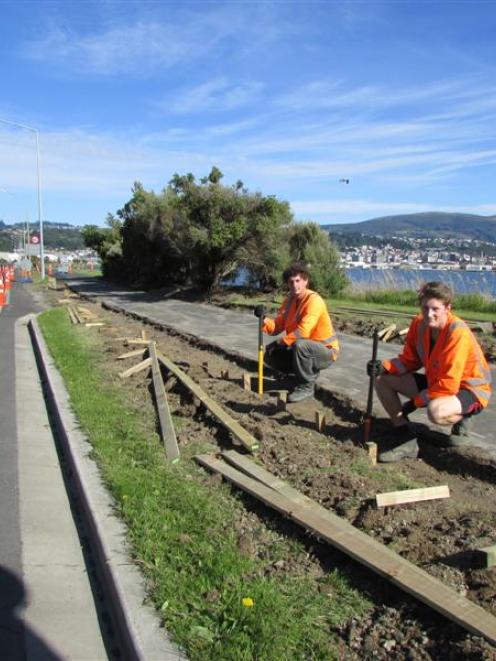 Labourers Tom McKinlay (left) and Sam Newton work on setting up boxing for asphalt on the final 50m stretch of the widened Portsmouth Dr cycleway-walkway. Photo by Brenda Harwood.
Cycle and pedestrian routes through the southern city are opening up, as work progresses on phase one of the South Dunedin cycleway-walkway network.

Work started in mid-November on four connecting sections of the network. Contractor Fulton Hogan is on track to construct about 3.5km of 3m-wide pathways in the area by April. The $1.7 million project is phase one of the $4.5 million South Dunedin strategic cycle network.

The first part of phase one has involved widening the existing pathway in Portsmouth Dr - scheduled for completion this week - and building new pathways in Shore St and Royal Cres. Work is to start next week on cycleway-walkway paths in Portobello Rd (between Portsmouth Dr and Andersons Bay Rd), and in Victoria Rd.

Dunedin City Council senior contract engineer Chris Hasler said the Shore St section of the cycleway-walkway, which is being built on the cliff side of the road, involved extra safety work. Because debris was occasionally washed down the cliff by heavy rain, ''rock-catching'' fences would be built to protect cyclists and pedestrians, Mr Hasler said.

''The Shore St section of the network will remain closed until those fences are in place.''

The pathway in Shore St would connect directly with the cycleway-walkway in Portobello Rd, which would be constructed within the existing carriageway, he said.

''There are now low volumes of traffic along that part of the carriageway, so we are able to make use of that space for the cycleway-walkway.''

The pathway was an ideal use for a section of road that was not required for vehicles and would result in a useful section of the network in an area close to schools, he said.

DCC senior transportation planner Lisa Clifford said it was important that the shared pathways linked up as much as possible with other parts of the network.

''It is important that they [the pathways] connect with something existing - we want to create good links across South Dunedin,'' Ms Clifford said.

Part two of the South Dunedin cycle network, which would involve building north-south and east-west links in the area, along with school links via a mix of separated bike facilities and ''quiet streets'' routes, would go out for tender in late April.

The ultimate goal of the network would be to provide an ''interlocking grid'' of safe routes for cyclists and pedestrians right through South Dunedin and from St Clair into the central city, Ms Clifford said.

''It's great to see it all starting to take shape,'' she said.

Fulton Hogan paving department manager Scott Payne said the work had progressed well and there had been good feedback from the many cyclists and pedestrians using the Portsmouth Dr pathway.