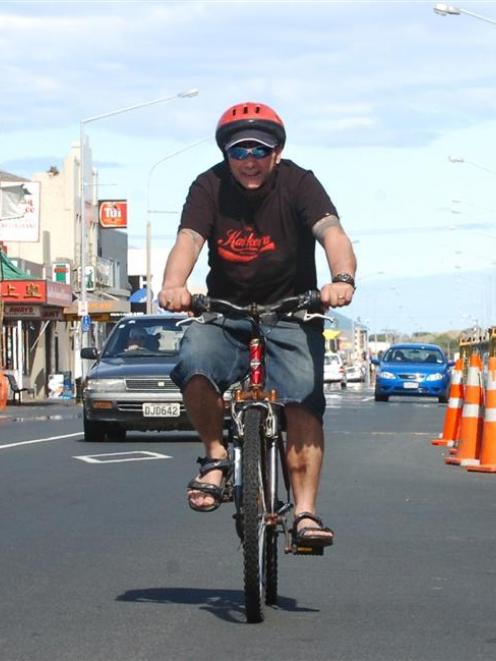 Cyclist Paul Hansen rides along a quiet King Edward St in South Dunedin, yesterday afternoon. Photo by Jane Dawber.
South Dunedin cyclists look set to be the guinea pigs for when the Dunedin City Council rolls out its first network of urban trails as part of a wider cycling strategy.

Key factors understood to have advanced South Dunedin to the forefront of the council's cycling strategy - ratified by councillors in August - are the flatness of the suburb, its high population density and the condensed nature of residences in the area.

Councillors are yet to see a network template for six proposed cycle routes through South Dunedin, some of which will link to existing cycleways, such as the harbourside route along Portsmouth Drive.

A cycling network through South Dunedin also aligned well with other city council projects, such as a revitalisation plan for the suburban retail area along King Edward St, and existing school travel schemes, she said.

"We'll get more benefit for our investment. We have the most ... cyclist issues - lots of traffic, lots of people living there, but it is very flat," she said.

No "detailed design work" had been completed yet, although there had been consultation, Ms Connolly told committee members.

The revitalisation plan for King Edward St involved "increasing amenity" for pedestrians and it is intended to encompass cyclists. Shared paths and lanes are a possibility..

Transport committee member Lyn McKie asked whether provision might be made for the many mobility scooter-users in South Dunedin to use any proposed cycleways.

"Rough costs" for preliminary plans of the prototype cycling network were about $8 million. That could reach $35 million for a "high end" design, she said.

Members of the regional council transport committee, which includes representatives from Otago's six local authorities, the New Zealand Transport Agency, and other community organisations, were shown a map of the proposed cycle networks.

Ms Connolly declined to provide the map to the Otago Daily Times, as it is yet to be ratified or approved by councillors.