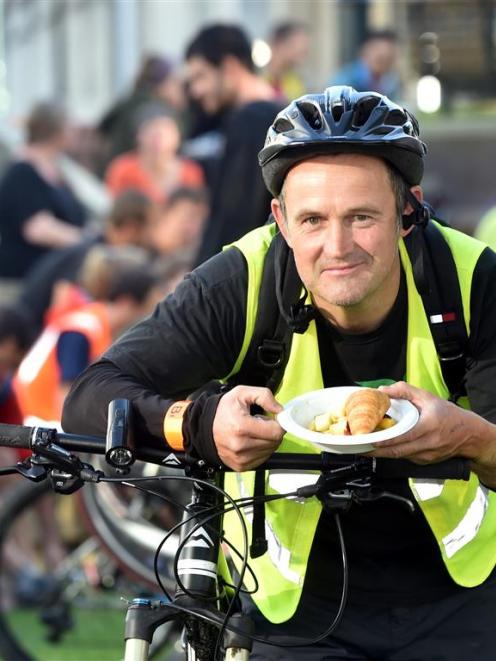 Steve Walker, of Port Chalmers, enjoys a free breakfast in the Octagon yesterday. PHOTO: PETER MCINTOSH
If breakfast numbers are anything to go by, cycling is on the rise in Dunedin.

Yesterday's national Go by Bike Day began in Dunedin with a free breakfast in the Octagon for those who arrived on a bike.

About 450 cyclists dropped in between 6.45am and 9am, Spokes Dunedin secretary and Bike Breakfast organiser Carol Tippet said.

That was a 50% rise on the previous year.

‘‘And it had a really steady feel about it this year; it felt like the place was kind of humming the whole time.''

About a dozen Spokes volunteers set up the Octagon for the event before serving the cyclists muesli, fresh fruit salad, yoghurt, croissants, juice and coffee.

The breakfast crowd included ‘‘a considerable number'' of foreign travellers and at least one group of cyclists who made the trip from Mosgiel.

The event was ‘‘just a chance to celebrate cycling'', Ms Tippet said.

‘‘Really, it was just a chance for cyclists to come and mingle. The mood was great. People came and stayed for quite a long time. They were really appreciative.

‘‘It was pretty relaxed and people just sat all around the stairs, chatting and mingling.''

The breakfast, sponsored by local and national businesses, showed cycling was picking up in the city, Ms Tippet said.

‘‘I think the event is getting momentum. People look forward to it. And I think it reflects the growing number of cyclists.''