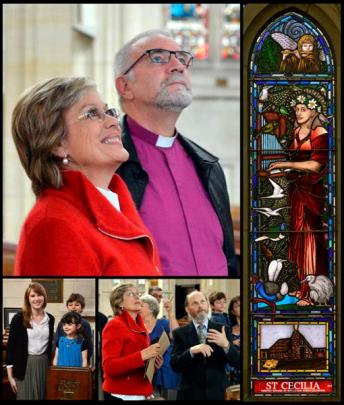 One of the world's leading sopranos was all smiles yesterday as she viewed her likeness in a stained-glass window at St Paul's Cathedral, Dunedin.

Dame Kiri Te Kanawa said she felt ''incredibly honoured'' to have her face portrayed as St Cecilia - the patroness of musicians and church music - on a recently commissioned work at the cathedral.

The opera singer was in Dunedin on her way to Oamaru to perform at the refurbished Oamaru Opera House this evening.

''It's really lovely. I love church windows, and to be in one is pretty amazing.

''I wouldn't say I've been immortalised in the window - but it's there for hundreds of years now.''

She photographed the window, saying it was wonderful to see it in person, and marvelled at the ''gorgeous'' colours.

The four-panelled artwork was commissioned by Company Bay residents Dr Stella and Dr Donald Cullington, and was created by Maia stained-glass artist Peter Mackenzie, who spent two years researching and creating the window.

Mr Mackenzie said Dame Kiri was the perfect choice for St Cecilia because she was a well-known New Zealander and she embodied the mix of cultures embraced by the Anglican Church of New Zealand.

Also captured in the window was the Anglican Bishop of Dunedin, the Rt Rev Dr Kelvin Wright, as St Paul.

Dame Kiri said her Oamaru recital would be the last of 10 she had given across New Zealand and Australia this month.

She will return to England tomorrow to prepare for more performances in Europe and a guest appearance on British period-drama television series Downton Abbey later this year.

She will play Australian soprano Dame Nellie Melba in the series, and will sing as part of her role.