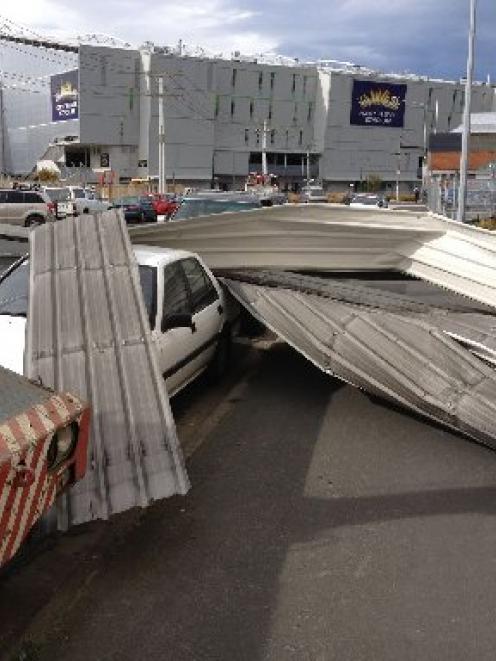 Half a dozen vehicles parked in Parry St on Tuesday were dented and scratched by sheets of metal and other material blown off the SRS Dunedin building at 20 Parry St during strong wind gusts.

Ravensbourne resident Uli Ludemann and another vehicle owner were initially told by the council the damage to their vehicles resulted from an act of God and the council's insurance would not cover the cost of repairs.

But yesterday, they were contacted by council staff and told their cases would be assessed under the council's insurance criteria.

Mr Ludemann, who only had third party insurance for his damaged vehicle, said he was relieved the council was considering his case.

''DCC staff contacted all vehicle owners whose cars were damaged by dislodged material from the building. Most owners are following the usual process through their own insurance companies,'' he said.

''The concerns of the two vehicle owners who directly approached the council because they did not have insurance have been passed on to our insurance company to assess.''

The spokesman said the building at 20 Parry St was being assessed by engineers following it being damaged by Tuesday's wind. Before Tuesday, the council was happy with the state of the building, he said.

It complied with the Building Code and did not have any structural problems, as far as the council was aware.