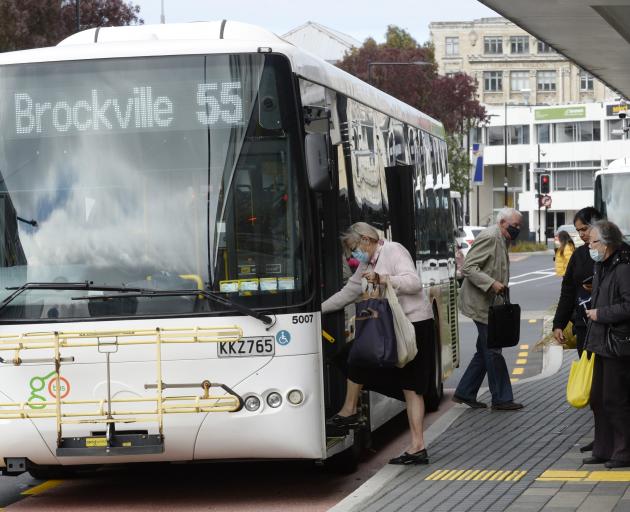 Bus patrons at the bus hub in Great King St, Dunedin.PHOTO: GERARD O'BRIEN
Pleas from the Dunedin City Council to be allowed to take over managing city bus services have run into a roadblock.

The Otago Regional Council has no intention of considering a transfer, regional council chairman Andrew Noone has confirmed.

The ORC planned to increase budgets for passenger transport in the next decade and fulfil its regional transport responsibilities, Mr Noone said.

Control of bus services has been a point of friction between the two councils and Dunedin Mayor Aaron Hawkins made the case for change during annual plan hearings this year.

‘‘Strangely, the only thing the regional council seem genuinely committed to around the bus service is maintaining complete control over it,’’ Mr Hawkins told regional councillors in June.

‘‘Our people, and our planet, deserve better.’’

In a letter to Mr Hawkins dated October 21, Mr Noone said the regional council was committed to a much more ‘‘enabling’’ regional public transport plan.

Improvements in service levels would be subject to any business case stacking up, the ORC chairman said, mindful of both benefits and costs.

However, its commitment was embedded in both its regional public transport plan and long-term plan, he said.

Mr Hawkins yesterday said he continued to believe the community would be better served by a bus network governed locally, rather than regionally.

This would not be through ‘‘some magical ability we have to do a better job of it, but through the ability it would give us to plan our transport network in a far more integrated and responsive way’’.

Mr Hawkins said the city council would continue to advocate for this, despite the regional council’s reluctance.

The ORC management are drunk with power yet are too incompetent to realise they can't do the job the ratepayers pay them for.

The DCC keeps claiming that we, the residents of Dunedin, keep asking for council to provide more and that their budget just can't provide for those services. That's why they have to put up our rates by so much every year.

Hawkins should go back to his hitchhiking to and from work instead of trying to find ways to increase rates and destroy services to the city residents.

Why, then, does anyone on council then insist that they should be providing an expensive bus service in place of the currently provided service? They sure can't provide it any cheaper and history has shown that the DCC is not able to provide anything any better. The residents of Dunedin would only end up with a more expensive bus service that was worse than what is already here.

Petty squabbling between our councils while the earth heads towards a crisis that will make the pandemic look like a walk in the park.
The UN World Meteorological Organization said ahead of COP26, which begins in Glasgow on Sunday, that greenhouse gas concentrations hit a record last year despite covid and the world is “way off track” in capping rising temperatures.
Current commitments to cut greenhouse gas emissions put the planet on track for a “catastrophic” average 2.7-degree Celsius temperature rise this century.

DCC can't even manage to move a bus stop without completely messing it up.
Based on the mayors previous comments, if DCC were running buses they would immediately replace all diesels with electric buses and have buses on every route at 10 minute intervals from 5am to midnight. And ratepayers would again be paying for greens idiocy.

No, DCC used to run the bus service and it was centralised to ORC. Leave it to them, ratepayers can't afford the alternative.

I've had 1st had experience dealing with the ORC and public transport for the past 10 yrs and they are hopeless. They don't listen to what bus users and potential bus users want, and the councillors themselves have no idea what their transport staff are really doing (or don't care). Time to hand over to the DCC, who know the needs and possibilities of buses users and are motivated to get people to leave their cars at home and thus improve the environment.

The ORC axed the perfectly adequate bus service to City Rise South which affected hundreds of residents. Most Regional (ORC) councillors had no knowledge or interest in this high-density residential area and simply followed the report of the transport manager, who also lived out of town. It was obvious during submissions that the ORC didn't even know the population of city Rise, let alone the topography. Residents here need transport to get to the nearest shop. Time for the local council to be involved.