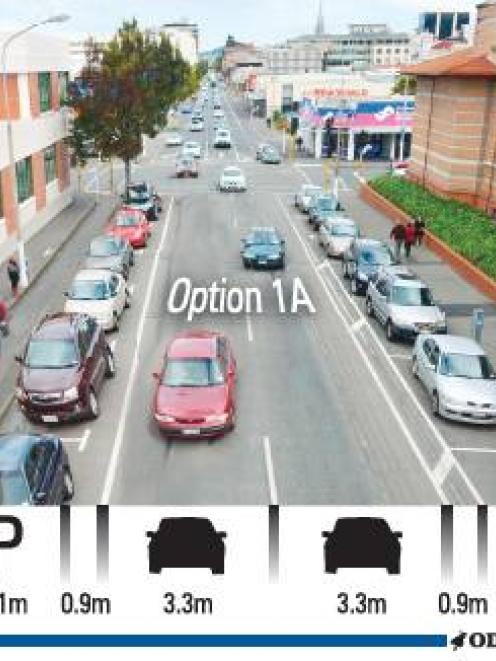 A corrected graphic of a new option, known as Option 1A, for a new separated cycle lane in central Dunedin shows the cycle lane on the right-hand side of the traffic going north, between car parks and the footpath. Graphic by Mathew Patchett.
A multi-storey development housing parking and businesses is being considered for the Dunedin City Council-owned Frederick St car park site.

A report sent to councillors this week reveals council staff have already had discussions with several parties interested, as tenants or developers, in a development on the site.

The report discusses three options for a separated cycle lane through the central city, and a parking study done in the area.

It also considers possible ways to mitigate the potential loss of car parks - the major public concern about any new lanes - including possibly providing more commercial parking, such as a parking building.

If the council chooses to provide about 100 extra parks on side streets as suggested, the total number of car parks lost to the lane would range from between 80 and 284 under the various options.

Although a new parking building was not viewed as necessary to address the loss of on-street parking caused by a separated cycle lane, combined with proposed changes to the district plan and other factors, the parking building project might seem more attractive, council transportation planning manager Sarah Connolly said.

The development discussed would provide space for both parking and businesses with a direct connection to the nearby Dunedin Hospital and health services, she said.

A concept design for the site showed a four-storey mixed-use development could be built, with 228 car-parking spaces.

The council's present district plan already allowed a building up to 40m high and a mixed-use development, especially one that supported the growth of the hospital and related services, would be strongly supported in proposed changes to be incorporated in the next district plan.

Council staff working on that had already looked at the potential of putting additional car parking on the site, as the preference was for reducing residential parking requirements in the city's campus area, which could result in greater demand for on-street parking for residents and the need to extend residential parking schemes.

That work was still under discussion and if the idea progressed any further it would be brought to councillors in a separate report.

The council could consider developing the Frederick St car park site itself, or selling the land to a developer with conditions on how it should be developed and leased, Ms Connolly's report said.

A development could create additional car parking near the hospital, university and Otago Museum, intensify land use and improve urban amenity.

While there was no reason to promote it solely because of the cycleway project, given the positives it was an idea that might be considered in the future, she said.

The council will decide next week whether to endorse further development of the three options.

The primary implications of the cycle lanes for the council would be parking and maintenance.

Consultation showed generally that cyclists preferred a one-way separated cycle lane at the right of the city's one-way State Highway 1 pair, with no parking on that side (option 1), while the general public preferred a single two-way cycle lane through the area, also with no parking alongside it (option 2).

This week the council and the NZTA introduced a third option that would resolve some of the concerns of businesses and properties along the route. Option 1A would retain parking on both sides of SH1 on some blocks.

It would also come with its own set of consequences - a buffer would still need to be in place between cars and cyclists, and there would be risk of conflict between pedestrians crossing to the path and cyclists.

However, it was a treatment commonly applied internationally and people had suggested it in consultation.

Spokes Dunedin spokesman Dr Robert Thompson said the devil would be in the detail of Option 1A, and he looked forward to seeing it.

''We certainly appreciate that parking is an issue for a lot of people, particularly businesses, and we can fully support the idea if it doesn't compromise the usability and safety of the lanes.''