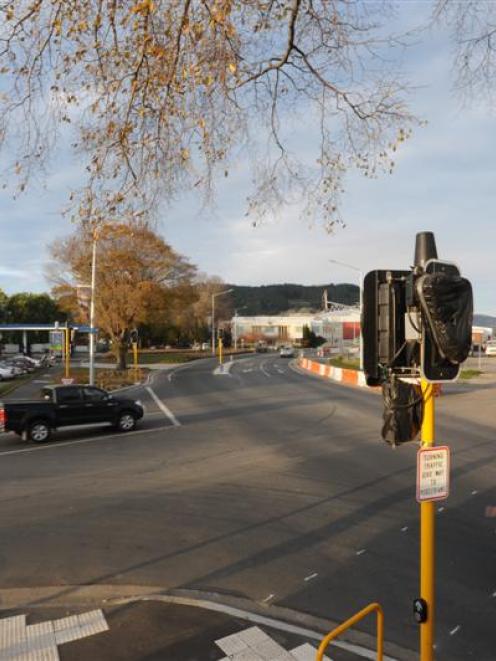 The corner of Frederick St, Dunedin (left) and Anzac Ave (State Highway 88) and the entrance to Doug Hall's transport yard. Photo by Craig Baxter.
The Dunedin City Council has been ordered to pay more than $185,000 in costs following its botched handling of the state highway realignment for Forsyth Barr Stadium.

The plaintiffs, Anzide Properties Ltd, Hall Brothers Ltd, and Dunedin Crane Hire (2005) Ltd, had raised safety concerns about the configuration of the road, before its opening on April 5 last year.

"The council has proceeded to build the road which affects their properties and their businesses, in reliance upon a decision of the council, which it has accepted was improperly made," the decision noted.

"The road is, it seems, in place with no proper legal basis."

Dunedin Mayor Dave Cull said last night "it would be fair to say council did not handle things in an ideal way".

"[The decision was] the cumulation of a process that started with the development of the stadium, and the development of SH88 was by any measure fast-tracked to accommodate the need to have everything ready for the start of the Rugby World Cup.".

Asked if heads would roll over the council's handling of the saga, Mr Cull replied "No".

"I think things in hindsight could have been handled better ... Given the circumstances before the World Cup, there was a lot of pressure to get things done in a hurry.

"A few things slipped, it's fair to say. At the time, council did not make the best decisions, but they probably made it in good faith, so that is the way it is."

He said "considerable efforts" went into trying to find a solution for both parties.

Mr Cull, who did not know if costs had been paid, said "no-one wants additional costs", but it was better to know the costs now so the issue could be resolved.

"The important thing now is to find the best accommodation that suits Mr Hall, the council and the community at the most efficient cost."

In June the ODT reported the council had spent $300,000 on the roading dispute, with the final cost expected to be much higher.

Mr Hall referred comment on the decision to his lawyer, but echoed the same message as Mr Cull, that both parties were working together to find a solution.

The decision noted the dispute dates back to 2007, after the council developed a proposal for the realignment, and issued a notice of requirement in June the following year.

Anzide was listed as an affected party, but in June 2010, the council decided to realign the arterial route so it ran adjacent to the affected land, but not across it.

"It did not notify any of the plaintiffs of its intention to make that change. It now accepts that it should have done so," the decision noted.

Temporary access proposed by the plaintiffs allowed them partial use of the road, but restricted the full use of the entire roading scheme planned for the new road, the judgement noted.

Mr Cull, when asked for a timeframe in sorting out the road layout and the still-switched off traffic lights, replied; "as soon as possible".