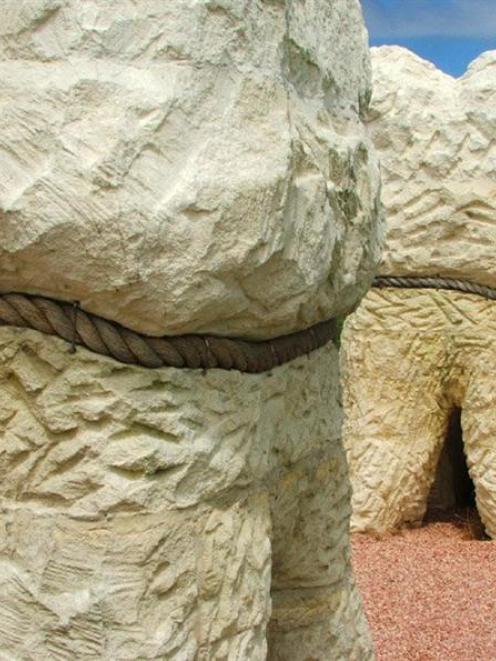 The Harbour Mouth Molars in Portsmouth Dr.
The budget for public-place art works in Dunedin has been slashed and the installation of new works is on hold while the Dunedin City Council's art in public places policy is reviewed.

The Dunedin City Council programme was one of the casualties of a council cost-saving drive to keep rates down in the face of shortfalls in various dividends this year.

There was a public uproar about the last work installed in Dunedin, Harbour Mouth Molars in Portsmouth Dr, and then a local political storm around the controversial Haka Peep Show.

The latter ultimately attracted $50,000 funding from another council fund, but stretched relationships within the council over the cost and secrecy surrounding the work.

Cr Lee Vandervis resigned from the art in public places subcommittee "in disgust" when it initially supported spending $100,000 on the work.

Councillors decided to stop funding the programme until 2016-17 and fund it only $100,000 every four years after that, instead of every two years, as previously. The programme is left with $89,000 of carried-over funds until 2016-17, when it would previously have received another $200,000 by then.

The $100,000 biennial budget would be stretched over four years.

Cr Bill Acklin said the subcommittee had not met since July last year. A review of the art in public places policy had subsequently been started, with a view to it being incorporated in an arts and culture strategy being developed by the council.

After the subcommittee's last meeting, Cr Acklin said he wanted to see the community better informed about the next project, once it was chosen.

He hoped as much information as possible could be provided so people knew what the project would be and why it was chosen, to avoid the situation with the molars, which just "appeared", to the surprise of many.

Council events and community development manager Rebecca Williams said how to achieve that would be considered as part of the review.

She noted that community buy-in on art works was "a sensitive balancing act".

She did not know how long the review would take, as the development of the arts and culture strategy was only in the early stages, so it could be "some time".

Cr Acklin said he hoped it would not be longer than six months before the programme was active again.