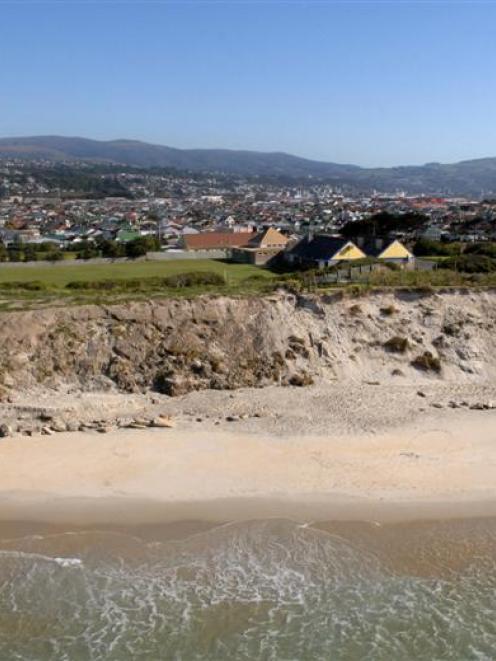 The threatened Kettle Park at Middle beach between St Clair and St Kilda. Photo by Stephen Jacquiery
Accepting the eventual inundation of Kettle Park and a "managed retreat'' from properties in the St Kilda area are two of the more controversial methods suggested to deal with the erosion of Dunedin's beaches.

Those, and the views of 49 others, will form the basis of a Dunedin City Council hearing during the next three days into an issue that has attracted strong interest among beach users and the wider public.

The hearing is a response to investigations into stabilising the beaches, made more urgent last year when large portions of the sandhills were washed away during a stormy winter, leaving a perilously thin strip protecting Kettle Park.

The council responded by taking emergency measures to restore sand to St Clair and Middle beaches, in an area known as the Ocean Beach Domain, using sand dredged from Otago Harbour.
In

December, the council announced it wanted as much public input as possible to find a solution. In particular, it was looking for photographic records of the beach domain.

A report to the hearings panel of city councillors Paul Hudson, Colin Weatherall and Dave Cull said submissions made it clear the beaches were highly valued.

One issue raised by submitters was the effect of dams on the Clutha River in stopping sediment that would wash up the coast and replenish sand.

But the report said it was considered unlikely erosion was a result of Contact Energy's operations on the Clutha.

That opinion would not influence investigations, though, part of which would model and quantify sediment supply to the beaches.

The report also noted investigations would include the effect of any solutions on areas beyond the beach domain.

Submissions include a wide range of responses, with everything from calls for an artificial surfing reef and a manuka scrub sand trap, to a wall of rock cages, and criticism of the St Clair sea wall.

Submitters range from surfing and surf life-saving clubs to engineers and academics.

Cr Hudson said yesterday about 30 submitters had asked to appear before the hearings committee.

After the committee had deliberated, its findings would be passed on to the emergency response team that would be managing the study, and both groups would consider what would happen next.