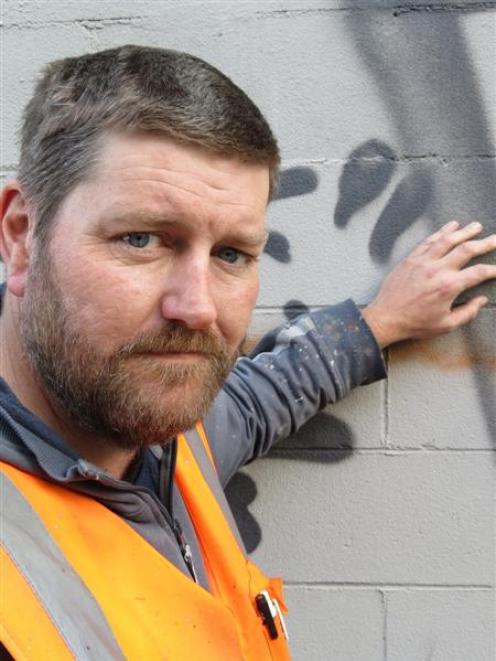 At present, several council departments, including parks and reserves, transport operations, property, and waste and water are responsible for dealing with graffiti, as is the DCC's Taskforce Green scheme. Each department has various contracts with graffiti removers.

DCC strategy and development general manager Sue Bidrose said under the present system some pieces of graffiti could ''fall through the cracks''.

The amount of time it had taken to remove the prominent ''Kate was Moss Here'' graffiti from a lower Stuart St rooftop was a catalyst for discussions, she said.

Since the start of 2013, representatives of affected DCC departments and Taskforce Green had met Keep Dunedin Beautiful and police representatives twice to work on a unified response to the issue.

''It's a serious problem that cost thousands of dollars a year,'' she said.

The response was possible under existing contracts and when these contracts expired there could be some attempt to align new contracts with the strategy, she said.

Taskforce Green and community volunteers are tasked with removing graffiti on behalf of the council at the request of private property owners.

Volunteer Darryl Angus said he would hear about new tags around the city every day. There had been a recent increase in Pine Hill during the past two weeks and Taskforce Green had been working with police to identify the culprit.

The DCC was responsible for removing graffiti on council property and there had been some discussions with private property owners likely to be affected by tagging. Ms Bidrose advised anyone who saw graffiti to call the DCC customer service number 477-4000 and report it.

THE COST OF TAGGING
• Taggers cost the Dunedin City Council almost $100,000 in the past few years.
• The transportation operations department was worst hit, having to spend an estimated $50,000 a year on graffiti removal from items or areas such as street furniture, traffic signals and roads.
• The parks and reserves department spent $24,422 in 2011/2012.
• City property spent $19,910 on graffiti-removal from properties they managed in the 12 months ending January 31, 2013.
• Water and waste was the least affected but still spent an estimated $5000 a year dealing with the problem.