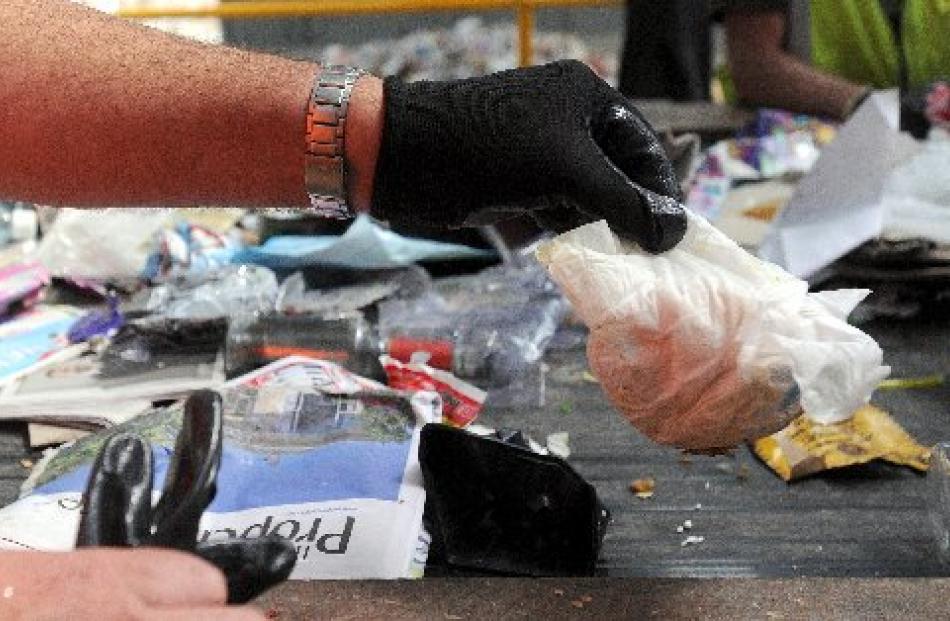 A used disposable nappy is plucked from the recycling sorting line. 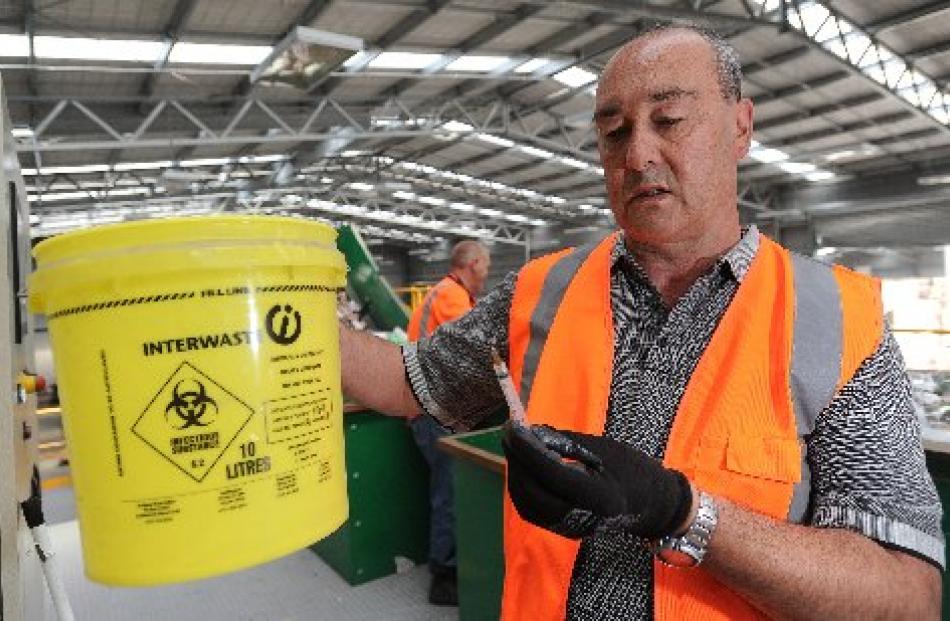 A worker at Dunedin's recycling plant is facing a nervous six-month wait for blood test results after being pricked by a discarded syringe.

The incident happened as the woman worked at the Green Island recycling plant last week, sorting through items coming down a conveyor belt as part of the Dunedin City Council's kerbside collection operation.

Fullcircle Recycling territory manager Taane Royce, whose company operates the plant, said the woman was back at work, but had been given shots and tested for hepatitis A, B and C and other diseases.

Results were expected to be at least three months away, and possibly six moths, he said.

It was not the first time a worker at the plant had been pricked. A steady stream of needles and syringes was hidden in Dunedin's recycling, he said.

However, needles were not the only disturbing items arriving at the recycling plant.

Gas cylinders, car batteries, a shotgun, used nappies and catheter bags containing urine had all been found in recent months.

The Otago Daily Times visited yesterday and was shown a stockpile of nine syringes stored in a hazardous substances bucket, all plucked from the recycling stream since Christmas.

Workers sorting the material said they were also dealing with "thousands" of dirty nappies discarded as recycling each day.

To illustrate the point, a council rubbish bag containing numerous dirty nappies was pulled from passing material on the plant's sorting line as the ODT watched yesterday.

However, needles were the biggest concern, because they were all but invisible to truck drivers monitoring their collections using cameras, or workers sorting the material at the plant, he said.

"They come across the sort line mixed in under a bit of paper and they [workers] go and grab a bit of cardboard or something and pull it off the line, and get pricked.

"The needles are the concerning bit, because no-one knows what it's been used for."

Workers were given gloves, but those were not capable of stopping needles, he said.

"The problem is there's nothing we can do. We can't get gloves that will stop needles.

"Your hands need to be able to move freely through the product and sort it, but give them as much protection as possible. We [have] just got to try and keep needles out of it. It's a major concern."

Asked if he felt those dumping the items were being malicious or stupid, Mr Royce said: "I just don't think they care.

"A lot of it at times you'd put down to students, but hey, the students aren't here right now.

This is the general Dunedin ratepayers who are doing this."

Council figures released this week showed 395 people had been issued "first strike" orange cards as warnings for improper use of the recycling wheelie bins since July 11 last year.

Another 17 had received final warning "red cards" for second offences, while three faced possible confiscation of their wheelie bins after being caught for a third time, the figures showed.

However, Mr Royce said the figures were only part of the picture, as his staff had already confiscated seven or eight wheelie bins after repeated improper use since the new kerbside collection system was introduced.

EnviroWaste operations manager Vaughan Adams, whose company operates the collection trucks, said many more offending items found in trucks or at the plant could not be traced back to an address, so did not result in cards being issued or wheelie bins confiscated.

Stricter enforcement was needed this year. Contamination levels, reported as between 2% and 2.5% in July last year, were actually "about 12%".

This was high compared with other New Zealand centres.