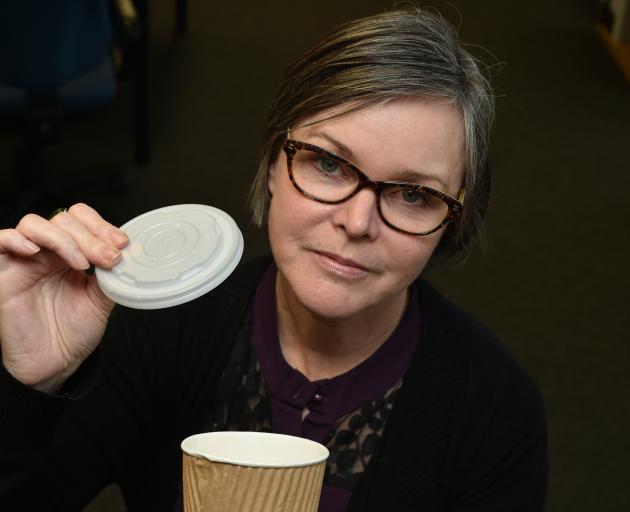 Dunedin City Council waste manager Catherine Irvine holds up a coffee cup lid which cannot be composted in any New Zealand facility. Photo: Gregor Richardson.
Dunedin cafes  buying so-called compostable coffee cups are being "misled", in what could be a breach of the Fair Trading Act.

Dunedin City Council waste manager Catherine Irvine said polylactide (PLA) disposable  coffee cup lids were being sold as compostable when there were no facilities in New Zealand capable of composting them. 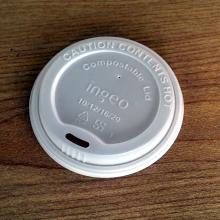 As a result, well-meaning cafes in Dunedin and across New Zealand were paying a premium for the lids in an attempt to "do the right thing" when they could not even be recycled, Ms Irvine said.

A spokeswoman for the Commerce Commission said companies selling the lids could be breaching the Fair Trading Act if they were being sold as compostable or biodegradable when they could not be composted here.

She pointed to a 2013 case in which a rubbish bag company was fined $60,000 for making misleading claims about its bags being biodegradable.

Ms Irvine, who said the coffee cups and lid claims were misleading, was keen to clear up confusion about the lids, which were becoming "more and more" common.

What added to the confusion was that PLA cups, made of a fibrous material, were compostable in household compost bins, just not the lids.

If the PLA product looked like plastic, like the lids, it could not be composted  in New Zealand, and there were currently no recycling options either, Ms Irvine said.  PLA cups belonged in the landfill.

Packaging companies argued  councils should set up facilities where PLA cups could be composted, but such a move was "not going to happen" because of the logistical problems in sorting them and  the length of time it took to compost them.

She believed the companies were guilty of "green-washing" their products.

The best option for coffee lovers was to take a commuter cup, which at some cafes meant they could get a discount.

"Any single-use product is a waste of resources."

We need a law that simply says if it cannot be recycled in the region or country where it is to be used, it cannot be manufactured.

We live on a finite planet, there is no 'away' to throw things to and our planet that we treat like a rubbish dump is rapidly filling.

Have to agree here, and there should be no excuses.

Pardon the pun but, what a lot of rot.
I compost the things in my simple system at home, surely there must be an industrial system which operates at higher pressure and higher temps than the one in my backyard.
I do cut them up, they compost fine and grow me wonderful tomatoes.
I think my kids learned about reaction rates in year 8 at school, surface area/ pH/temp/ pressure/concentration etc. Perhaps Dunedin City Council waste manager Catherine Irvine should ask a 12 year old how to solve the problem.