Consent in for five-star hotel 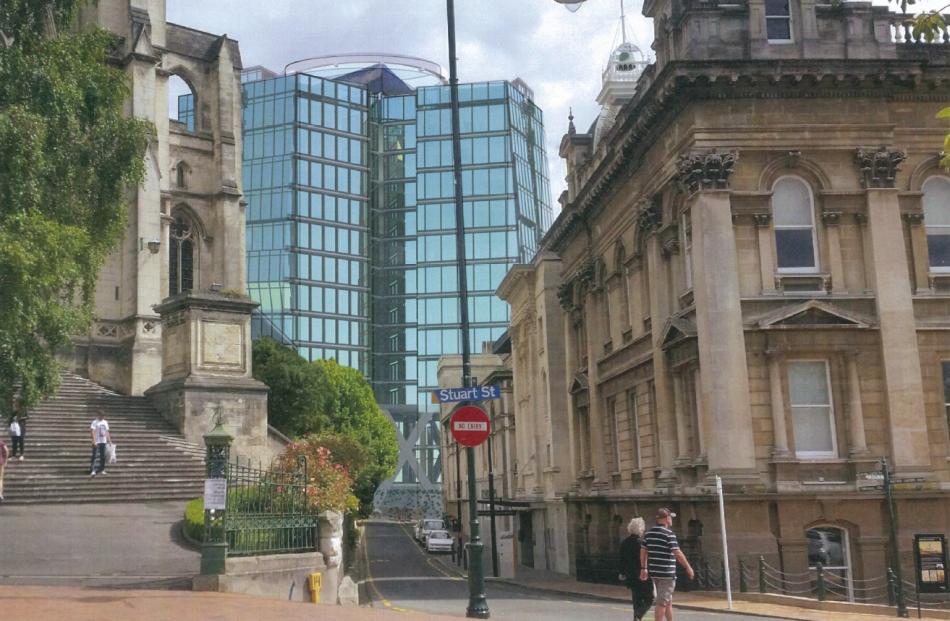 Impressions of the view from Harrop St between St Paul's Cathedral and the Municipal Chambers. 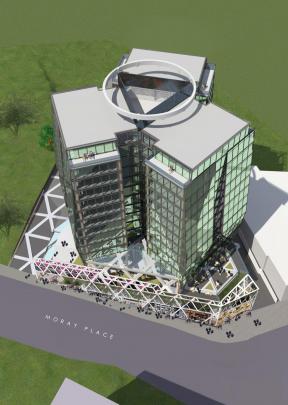 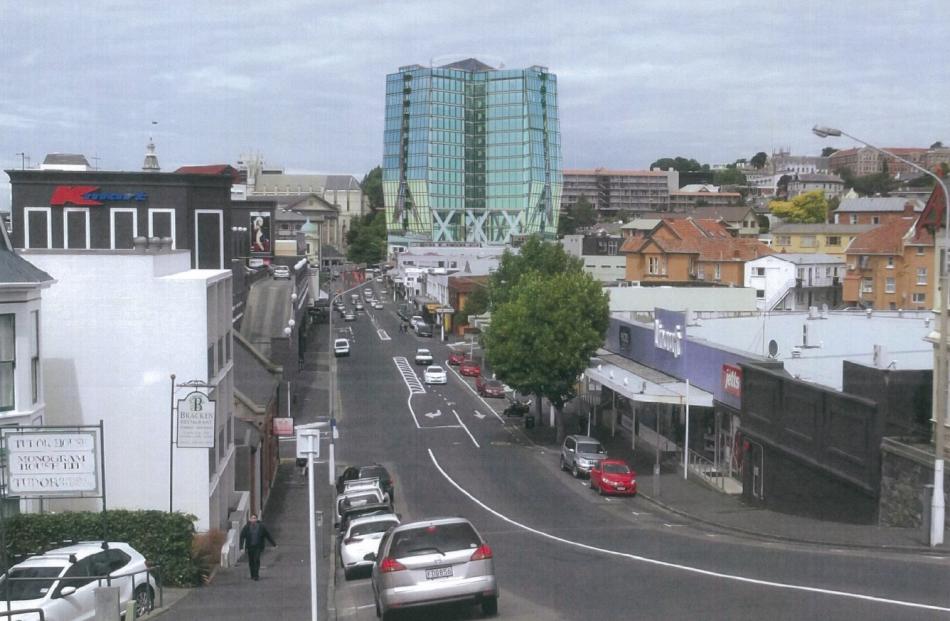 Artist's impressions of the view of the proposed hotel from Filleul St. 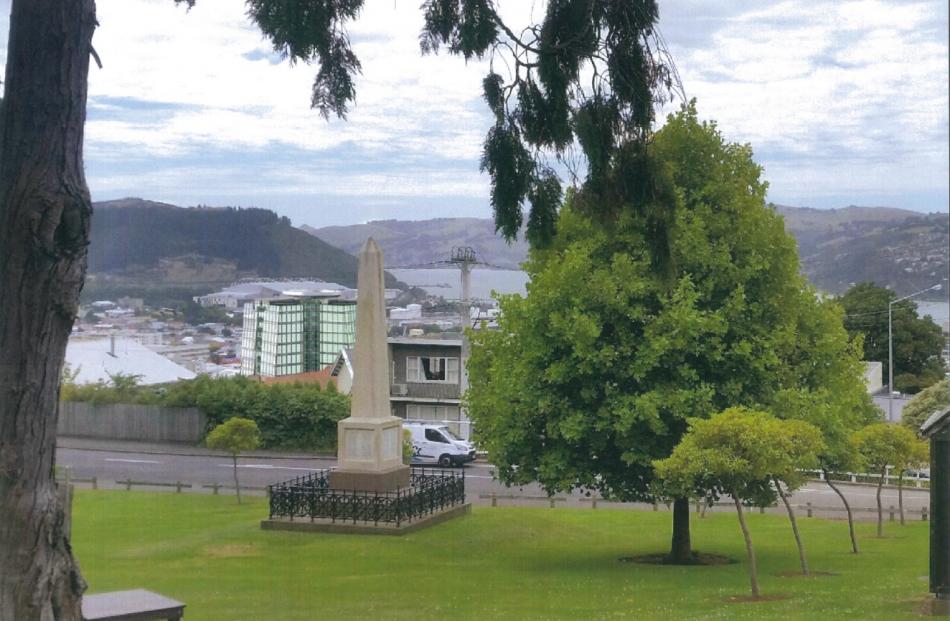 Impressions of the view from Rattray St.

The debate over Dunedin's latest five-star hotel bid is set to increase following the lodging of a resource consent for the 17-storey shimmering glass tower in the heart of the city.

Anthony Tosswill, the Tekapo businessman behind the project, has applied for approval to build the tower on Dunedin City Council land at the corner of Moray Pl and Filleul St, opposite the Dunedin Town Hall. 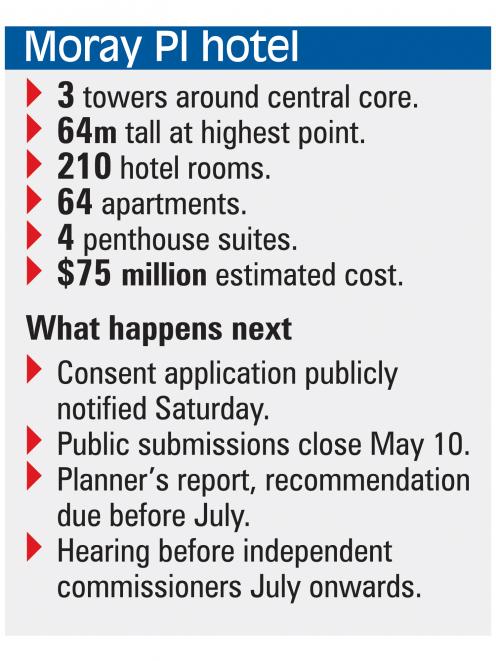 Plans for a hot pool and spa complex also featured, as did a new roundabout at the intersection, to ease traffic congestion and help pedestrians.

The project would be a ''major economic generator'' that delivered new jobs, more tourists and better marketing, and send a signal the city was ''open for business'', Mr Tosswill said in marketing material distributed this week.

''Dunedin needs a brilliant five-star hotel to grow our five-star city,'' he said in the document.

The project was said to come with an estimated $75million price tag, but also a global five-star hotel operator to run it.

The consent application has been in a preliminary stage for months.

This is because the developer and his representatives have worked with council staff to hammer out the information required.

The process finally concluded last Friday, when the last information was received, and the consent application would be publicly notified this Saturday.

Public submissions would continue until May 10, followed by a hearing before independent commissioners and, eventually, a decision.

But, with the hotel set to bust the site's 11m height limit and block views for some neighbours, Mr Tosswill and his representatives requested public notification.

The building's height has also been underscored by photographic montages, provided with the application, which showed the proposed hotel's appearance from around the city.

Mayor Dave Cull could also not be contacted, but Otago Chamber of Commerce chief executive Dougal McGowan said the application was ''fantastic'' news.

''It's positive. It's obviously moving ahead. If we can do things to support it, and the demand's there, it would be great to be able to get it across the line,'' he said.

Enterprise Dunedin director John Christie was also pleased to see progress, but predicted the hotel's height and appearance would be a key issue for submitters.

''There's no question most people are very interested in the look of any potential hotel.

''That seems to be the topic that will get the most debate.''

Public submissions would reflect that interest, but it was encouraging to see the ''enormous'' work Mr Tosswill and his team had put in to provide detailed information and engage the public up front, Mr Christie said.

The application came with a large volume of detailed technical reports, including an assessment of environmental effects, an urban design report and detailed analysis of the building's effect on wind, lighting, shade and the city's transport and other infrastructure.

Talks between Mr Tosswill and the council were first revealed by the Otago Daily Times in January last year, but the design was revamped after initial concept drawings, released last October, drew a mixed response.

Christchurch-based architect Thom Craig was brought in, and in January produced a new design featuring three glass towers around a central core.

A statement from Mr Craig, included with the application, said the project was ''exciting and desirable'' and ''evocative of its place and location''.

The building's profile, lightly tinted green glass curtain wall and angular lines offered an ''efficient'' build on a minimal footprint, while delivering an ''elegant architectural outcome for the city''.

Features included a ''public podium'' and courtyard, landscaped gardens and wall structures, and room for retail, lighting, seating, cycle parks and other public spaces, he said.

An urban design report by Anderson & Co, also included, said the hotel's height would be ''well above'' the 11m site limit and have a ''more than minor'' impact on views for people behind it on Cargill and London Sts.

However, the hotel would not be ''out of context'' with other tall buildings in the city's commercial centre, from John Wickliffe House and the Forsyth Barr building to St Paul's Cathedral and First Church. It would also support businesses and facilities along George St, and ''help consolidate the Octagon as the central focal point for the city'', it said.

Aren't you jumping the gun a bit with the headline? The application is in - not the consent.

The building looks very good. I just hope the business case doesn't rely on selling off X number of units before they start building. Dunedin does need a 5 star hotel, we don't need a developer's protracted get rich scheme. Dunedin could also very much do with the jobs that come with this hotel.

I only have one issue about all this: why does DCC continue to view all car parks as land available for developers? And why sell off any assets without an open sales process. This hotel proposal seems good, but who knows what other uses could have been applied to the site via an open sale?

Wow imagine that , a developer who actually works with the council and address's concerns. This is so much better than a glass box positioned to obstruct views with a sore thumb. I believe this site was also offered as an alternative to Betterways. It's so nice to see someone willing to collaborate rather than the attitude of "we have money, give us what we want".

Its a 17 storey dated monstrosity that's been made to look smaller by computer graphics. Unsuitable for Dunedin.