By Grant Miller
8 Comments
More time will be taken before the future of Dunedin Railways Ltd is determined.

Dunedin city councillors have decided to keep faith with retaining city ownership of the company, but they want more input from the community and information before deciding on its future.

Councillors voted 14-1 essentially to defer a decision, ahead of a council paper to be considered before 10-year-plan deliberations in May.

Cr Lee Vandervis, who voted against the deferral, said he believed the decision would close the door on one of the options that had been short-listed - negotiating a sale or lease with a commercial partner.

Dunedin Mayor Aaron Hawkins said he did not sense public support for closing the business and selling its assets for scrap.

The decision would allow Dunedin Railways to have another season of testing the local market's enthusiasm for a train service, after a summer trial was run this year.

The public were excluded for a time late this morning as Dunedin city councillors debated the future of Dunedin Railways Ltd.

The discussion was about commercial negotiations between the Dunedin City Council regarding a possible sale or lease of assets to an unnamed party.

The council has received a proposal from the entity.

In the public part of the council meeting earlier this morning, discussions ran for 50 minutes involving councillors and people who expressed views in the public forum.

Councillors have been presented with four short-listed options. One is the sale or lease of Dunedin Railways assets. Another is to wind up the company.

The others are to run a train operation on both the national KiwiRail network and the Taieri Gorge line or a more restricted service, using the the national network only.

The company, which was facing a sharp downturn in custom due to a lack of international tourists since the Covid-19 pandemic, has been in hibernation since July last year. 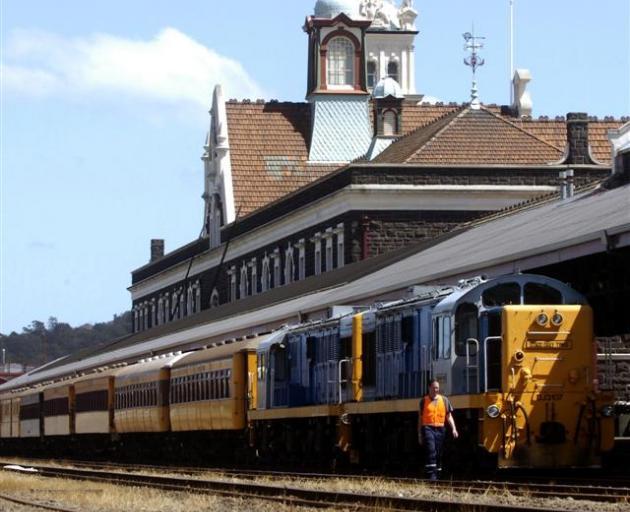 Maintenance and catching up on upkeep for the Taieri Gorge line could cost between $6.5 million and $14.8 million over the next 10 years, depending on whether the line from Wingatui is maintained as far as Middlemarch, or for a shorter stretch.

Dunedin City Holdings Ltd chairman Keith Cooper said KiwiRail was not interested in taking over the line, which is owned by Dunedin Railways.

The business model for the service that had been run before the pandemic was not sustainable, Mr Cooper said.

It had attracted 80,000 passengers a year, but the operation had not been on top of deferred maintenance, he said.

First Union organiser Sonja Mitchell said today it was not the right time for major changes.

It was not the right time to sell off assets or get rid of a low-carbon form of transport, she said.

The opportunity cost that would come with not having a railway should also be considered, she said.

Rail and Maritime Transport Union representative Dave Kearns said rail was only going to grow in the future.

He asked councillors to consider ratepayer support as an investment, rather than a subsidy.

He did not support closing or selling the Dunedin City Council-owned company and said a strategic conversation was needed about its future.

A paper could come back before the council in May, ahead of deliberations on the council's 10-year plan.

Several councillors have spoken in support of deferring a decision on the company's future..

Raewynne Pedofski helped organise Port Chalmers Day on March 20, for which a train service was provided from Dunedin

There were 274 passengers and one retailer noted the shoppers were less likely to haggle over prices.

"Retailers were saying it was far better than a cruise-ship day."

Discussions in the council meeting continue.

Common sense would say keep the railway and look to the future. Sadly common sense is not a feature of this administration. Still, we can hope.
Maybe if Hawkins realises the train won't need a parking place on George St he will be less inclined to scrap it.

Now more than ever is a time for major changes. The railway is a financial liability not an asset. The tourist train is not a low carbon form of public transport, in fact the black smoke emitted from the trains is not only bad for the cities goal of carbon neutrality but is also extremely damaging to public health!
Pouring money into an out dated environmentally damaging tourist attraction that losses vast amounts of money each year is not an investment, it is charity at best. Trains will not be lost from the city as they will continue to be play an important role in the transportation of heavy goods but until we have a high-speed inter city electric or green hydrogen passanger train service, diesel passenger trains will be nothing more than an expensive, highly polluting hobby interest for the few.

The locomotives only emit black smoke at the moment start up, for their relative size, no more than a truck or bus starting. I know, because I worked with them for almost 30 years. Of course they smoke more than your car, given they produce 900hp per loco.
So, if you feel this is outdated, I hate to think, if that attitude was applied to every heritage flavoured tourist attraction, say the TSS Earnslaw. People with a taste for culture see it as that, unique rather than everything modern, genric.
It needs to be noted that the railway generated a lot more revenue than the asking for 3 decades, the reason for the burgeon of cruise ships, who poured millions into the local economy. As the word spread, more people came to the city by other means too, also putting into the economy, something that seems to be forgotten.
There is only 2 other places where a train trip through similar scentry can be taken, in Colorado, USA (Durango Silverton steam railway). They would never let those go as it's likewise to DR, an icon of the region, visitor magnet and above all, they know the value of something rather than the price.

Best we get started to ban volcanoes then eh.

Sometimes I wonder if Vandervis is the only sane member of the council. If the current manager says it's not viable and KiwiRail don't want a bar of it, surely that tells everybody all they need to know. But apparently not.

Some of the comments are unbelievable:
"(Hawkins) did not sense public support for closing the business and selling its assets for scrap." Took a poll, did he? And when has Hawkins ever believed in ceasing public ownership of anything?

"It was not the right time to sell off assets..." With union officials, there never is a right time.

"rail was only going to grow in the future" Only if the future consists of going back to the 19th century.

Just perhaps the said current manager has no long standing rail background. The comments here are more unbelievable. Look around the world and see that rail is in most countries the biggest player in moving people and stuff around. With out them, transport would be crippled.
The railway may not have paid off at face, but the bigger picture is it was the key reason many visitors, a lot on cruise ships, started coming in droves to the city than before, spending in accomodation, venues and much else in the city, there by much more went into the local economy over 3 decades that what is needed. Removing this is like taking TSS Earnslaw from Lake Wakitipu. But for some, it's the knowing the price of something, not the value, especially in this case 130+ years.

Keep the trains. You don't know what you've got till it's gone. If you remove the trains you get nothing at all like it in it's place. Who needs another train museum when we can have living trains, journeys, fun and invite tourism back? Very soon we will be a busy wee city again as the disease subsides. Tourists and the locals will use the trains once again. Keep the trains, please.

The sooner VDV and Radich form a deal to be Deputy and the Mayor the better.