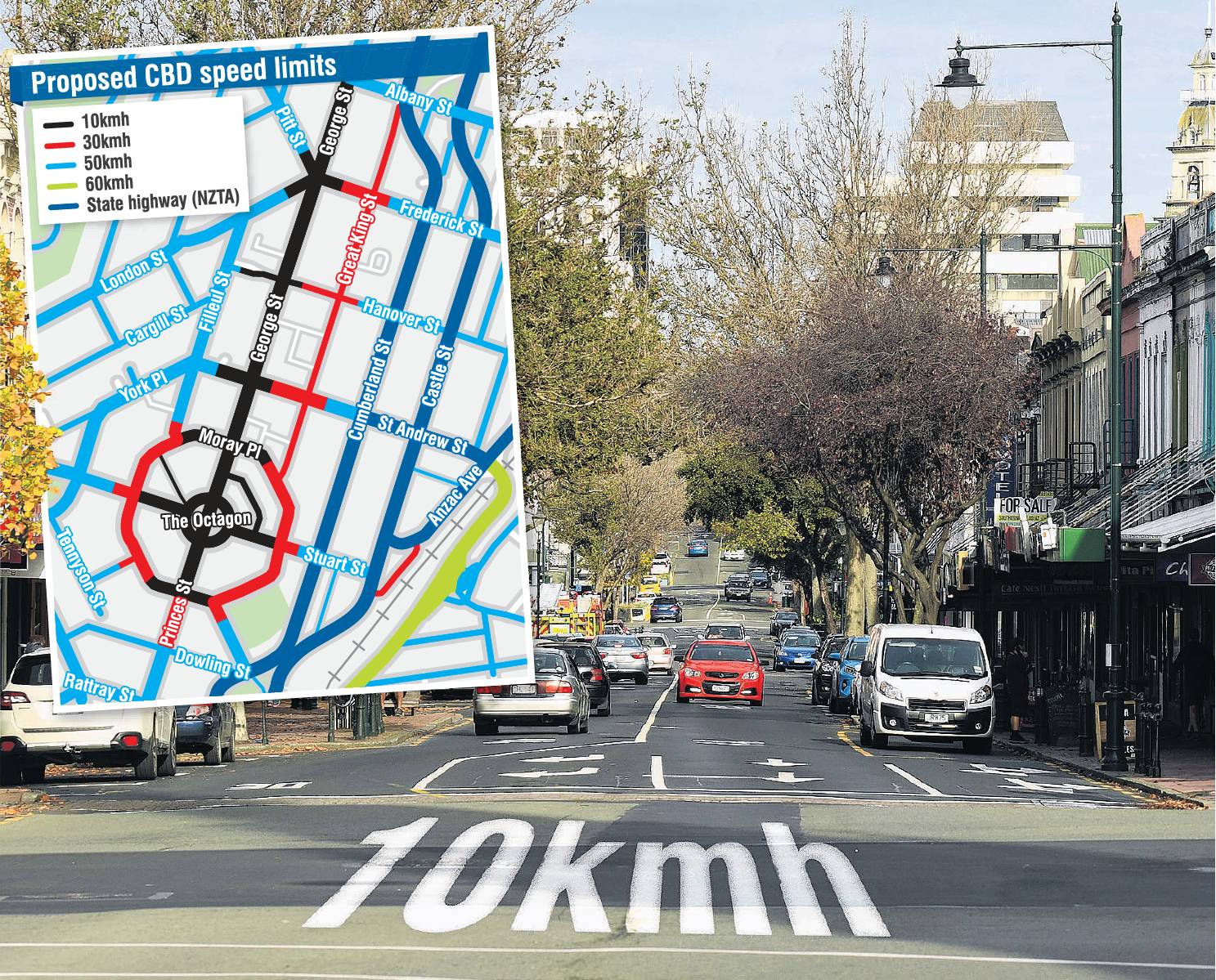 The Dunedin City Council’s proposal for speed-limit changes in the central city. PHOTO: STEPHEN JAQUIERY/GRAPHIC: ALISTAIR CRAIG
A plan to support local retail and hospitality businesses through Covid-19 Alert Level 2 has been panned by members of the Dunedin business community.

The Dunedin City Council’s proposal is touted in council documents as an effort to encourage people to return to shopping areas and includes a temporary 10kmh speed limit in George and Princes Sts, the installation of temporary speed bumps, and increasing the frequency of Barnes dance crossings.

The proposal was called ‘‘disgusting’’, ‘‘pedestrianisation jammed down people’s throats’’, and an ideologically driven change that ‘‘could be the straw that broke the camel’s back for many businesses’’ by a series of business representatives yesterday.

The ‘‘Safer CBD Streets - Covid-19 response’’ plan, which will be considered at tomorrow’s planning and environment committee, was mooted by Dunedin Mayor Aaron Hawkins at the May 4 council meeting.

Yesterday he rejected the notion that the plan represented a major change to the area; that there was only one viewpoint representative of the entire business community; and that the proposal was an example of pedestrianisation.

‘‘Yes, it’s about bringing people to the city centre but it’s about making people feel comfortable that they can return to that part of town and be able to maintain safe physical distance from one another,’’ he said.

‘‘This is about trying to support both customers and retailers to operate in an unusual environment for however long — we don’t know.’’

Mr Hawkins called writing off plans as ideologically driven ‘‘intellectually lazy’’ and said there was nothing proposed that could not be ‘‘turned off overnight’’.

He conceded there had been a trade-off between bringing a plan forward in time for the move to Level 2 and a higher level of consultation, but said another survey was sent out last night to seek views of businesses and building owners in the city centre.

Cr Jules Radich said the plan lacked ‘‘inclusive participation’’ and represented instead ‘‘an ideological drive’’ towards the goals of a car-free city centre.

He was opposed to an autocratic approach driven by thinking that did not recognise ‘‘car-driving culture’’ exists in New Zealand, the appeal of the ‘‘big box store’’ in suburbs, which offered convenient parking, and the need to ‘‘ease people in’’ to the idea of pedestrianisation of retail areas.

‘‘If you’ve got lots of convenient parking all around the periphery then people will use that — then you will have pedestrianisation as a natural progression, and a desirable thing,’’ he said.

‘‘I want an organic, natural, positive progress, so that we’re taking people on a journey where they want to go.

‘‘And instead what we’re having is pedestrianisation jammed down people’s throats and sold that this is the ‘wonderful idea of how you’d want it to be’.’’

The Otago Chamber of Commerce had not been consulted on the proposal and chief executive Dougal McGowan said he had not seen the details until Monday night.

The details had surprised members, and concerns the business community had not had the opportunity to be consulted ‘‘in a timely and effective way’’ in order to have changes ready for the first day out of lockdown was a theme in the feedback he received yesterday.

Heart of Dunedin spokeswoman Nina Rivett said the central business district advocacy group opposed reducing traffic flow and called for at least 12 months for businesses to regain resilience and try to attract people back into the city centre.

Radical change now ‘‘could be the straw that broke the camel’s back for many businesses’’.

George St jeweller Brent Weatherall, who is due to present a petition of more than 6000 signatures opposing the one-way traffic flow and pedestrianisation of George St earlier at the same meeting, said he was astounded a vote could be held on the new proposal moments later.

‘‘It is a slap in the face of everybody that has gone out of their way to stand up and be counted against this council.

‘‘Business has spoken and they are opposed to this.’’

Hawkins and his ideolog friends have no idea where money comes from.
They perceptive masses of it floating around and you've simply have to grab what you want, so you can do what you want.
This is want happens when you live in a 'world' that provides everything you want, without the requirement that you provide something back, that other people want.
It breeds arrogance, entitlement, fantasy and a manipulative personality.
Compare the pandemic response of the Invercargill and Clutha councils with the DCC and ORC.
Now we could easily dump all the blame on our lefty university friends and how they solicited student votes but the fact remains that the business sector failed to rise to the last local body elections believing that it didn't really matter because Dunedin was raising out of decades of decline.
Hopefully our change of fortune will provide the motivation for those that know how to make things happen and prosper, to run for public office.
If they don't, Dunedin's prospects will be comparable to the hospital build. A fantastic, long overdue idea but they decided to build it on mud, so it will never be what was envisaged.

Eyes Wide Open says: '... but the fact remains that the business sector failed to rise to the last local body elections.... ' Exactly right! Why they didn't make any effort THEN to look after their own interests beats me. During the last election, I heard not a peep - no organised interest or participation -nothing! - from the Dunedin business community, certainly not on social media where there was a strong campaign supporting the most business-friendly candidate, Cr Lee Vandervis, who has run businesses himself - something Mayor Hawkins has no experience of, having had, instead, a lifetime experience of FUNDED activities. Businesses don't run themselves and political campaigns don't run themselves either. Both need WORK and MONEY. There was a strong Green Party presence in Dunedin supporting mayoral candidate, Hawkins. This was NOT a 'level playing field for any of the independent, non-political- party- aligned mayoral candidates who pretty much had to struggle on alone campaigning as a one-man-band. Let's hope a lesson is learnt here for next election.

I’m a regular cyclist and this seems like idealism rather than pragmatism. If you want people in your CBD, why not abolish parking charges on the weekend, run free buses to the new depot from suburbs, and put on some family centric entertainment in the octagon? Personally I don’t feel threatened walking or cycling down George street at the moment and can’t see how slowing traffic to a crawl will do anything but add frustration. By all means move towards pedestrianisation but not right now.

Could this council become any more incompetent? Can we have a vote of no confidence in the mayor, he is the most inept in living memory.

So it is offical, the Mayor and Cr Benson Pope are both mad?

Benson Pope is the Mayor.

Offical. Bifocal. Learn to spell before tarring people with the epithet 'mad'.

One revelation lockdown had highlighted is when cars move slower or are not around at all, the city is a much greater place to be. It should be clear now why all the data from other cities shows reducing car volumes increases retail foot traffic. Safer and quieter streets are more joyful places to be.

Another thing lockdown has shown many people is life isn't about retail but about friends and family and creating joyful spaces. The retail sector should embrace making the streets more inviting before too many more people figure out you can't buy happiness and people then decide to not come back to the world of consumption.

Threads have gawn! I was reading this thing..and The Fleet's gone! No magician who waved his wand could have done so, so effacingly.

Hiya "Hull"...are you commenting in the correct thread? As a general rule, I don't mind reading the dull and nonsensical but its becoming arduous. Everybody has an opinion, even better when its pithy and informed. BTW - there is no pronunciation associated with the written word even here in Dunedin!

Cr Jules Radich I agree with, although for many in NZ car driving is not just a cultural thing but a practical necessity.

My god, the Council are OBSESSED with their anti-car agenda. Did they ever encounter a problem that didn't have an anti-car solution?

They need to wake up and realise that the silent majority of local citizens and ratepayers (their employers) do not support this nonsense!

Totally Awesome and well put, If you did have a colouring book for Hawkins, Benson Pope and Bidrose, they wouldn't be able to keep within the lines and then get frustrated and scribble in it out of frustration.

Learn how to look both ways before crossing the road. If this plan is anything like Maori Road between Arthur street and Serpentine ave... There are three speed bumps and two pedestrian crossing bumps all in 800m. How about turn them off overnight? They are incredibly annoying and insulting. No speed cameras but five new bumps. It is illogical and ideological - its about preventing people from actually making decisions so that all the thinking is forcibly done for you by the government. Which also has many decisions already made for them. The UN agenda-2030 world government. In the name of "saving the environment", "democracy", "safety", "be kind to each other" - what a scam and what a tool.

I bet Rothschild is behind this.

@Gordon, I agree! It's deliberate sabotage of the road network, in the name of "safety". Oppose it? Be accused of not caring about covid 19, pedestrian safety, or the environment. Be accused of 'intellectual laziness' for pointing out that the mayor is a cut and pasted ideologue, not a pragmatic leader.

The whole council - with one or two exceptions, Vandervis being one - needs to go.

Next election, we need some fresh faces who actually give a damn about Dunedin, its ratepayers, and a tiny thing called "fiscal responsibility".

In the meantime, I've heard there's a petition for a vote of no confidence in the current council. Where can I find it and how do we make that happen?