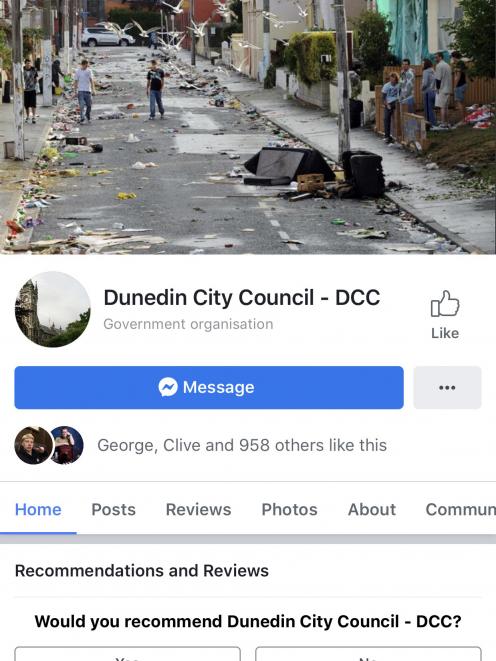 The fake DCC Facebook page. Photo: Supplied
A fake Facebook page satirising the Dunedin City Council has the real council in a spin.

The fake page, called ''Dunedin City Council - DCC'', was created on Monday and has since posted a series of comments and photos.

The posts included one about Baldwin St losing its status as the world's steepest street, in which the fake council announced ''the official decision has promptly been made to begin roadworks''.

''Baldwin Street will have its angle increased by three degrees, in order to reclaim it's [sic] title as steepest street in the world for New Zealand.''

The fake post also advised Baldwin St residents to ''enjoy the noise of heavy machinery and having no street parking for at least a year'', and included a link to a roadworks customer satisfaction survey on the real DCC's website.

By late yesterday, the post had attracted more than 100 comments, while the page itself had close to 1000 followers.

Other posts included one noting an emerging student trend away from burning couches and towards the ''healthier change to vaporising the couches instead''.

One post offered ''some cheap grams'' to followers, followed by a subsequent response to a comment, advising the person to ''message our Facebook page and one of our employees will get back to you within the next 5 working days. Kind regards, DCC.''

Council city services general manager Sandy Graham (the real one) yesterday said council staff were aware of the page and had contacted Facebook, asking for it to be removed.

''While there's no harm in a bit of satire, some of the recent posts are offensive. Our broader concern is that it could be confusing for people ... particularly in the lead-up to the local body elections,'' she said.

This is funny as heck, lets hope this FB page has the ability to Mentor Coach and guide the real DCC to become something it should be. In No way was the last directed at the hard working staff, it is directed at the Managers, Senior Managers and some Councillors who think that it is good business sense to waste Rate payers money, not stand up to Government contractors who conduct work in Dunedin and stuff it up, with the Coined phase of the DCC and supporters ' Its nothing to do with the DCC, it is NZTA or ORC' That BS needs to stop. The DCC has a duty of care to the people who live there and stand up and say that work is not accepted for the rate payers of Dunedin and not have sloped shoulders like the do. They need to also ensure Re work is covered in the contracts at contractors expense and not the Rate payers. - Sharpen up DCC Managers, Senior Managers and some Councillors oh and Cull.

Are the humourists boomer ratepayers? Stick with 'Critic OUSA'.