No action from council over ad complaint

The word ''tits'' in a breast cancer survivor's book advertisement has drawn a complaint from a Dunedin resident.

A large electronic billboard outside Forsyth Barr Stadium is advertising I Am More Than Just My Tits, by Karin Horen.

The book is a memoir by Horen, twice diagnosed with breast cancer, resulting in a double mastectomy.

The Auckland-based woman went on to co-found breast cancer initiative Paddle for Hope as well as cancer rehabilitation programme Paddle On with trust Pinc and Steel. 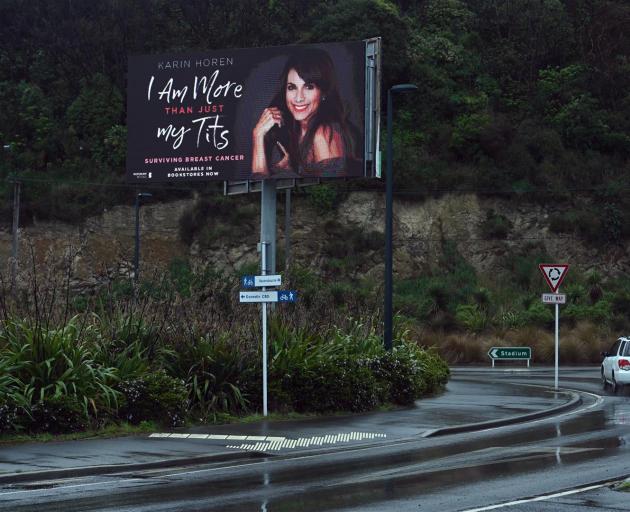 A Dunedin billboard was deemed objectionable by one resident. Photo: Linda Robertson
A Dunedin City Council spokesman said it had received a complaint ''relating to what the complainant perceived as offensive text''.

The resource consent for the billboard did not impose conditions on the use of offensive text.

''We also do not consider that the billboard meets the threshold of being offensive or objectionable, as outlined in the Resource Management Act, and we will not be taking any further action.''

The book was available in stores and already in the public realm, he said.

Horen said whoever complained probably did not understand the title.

''It should not be something that offends anyone. If it did, I apologise, but I stand by my words, which have meaning.''

Anyone reading the book would understand what the phrase meant for her, she said.

Many people saw breasts as ''objects''.

''It's very interesting to think why that word would offend someone. I haven't had any comments except positive comments.''

The idea she was using the word to be provocative was ''offensive'', she said.

Bazonkas. That should mollify the Calvinist.

Brave woman who cares about others

Some people have very little to do and a lot of time to do it in...

But why is it even there? Are people saying rude things to bc survivors about their breasts or is this for the morale of the survivors? Awareness is also a thing these days, apparently people need to have select things pointed out to them. The world has become a very strange place.

It is impact marketing, to draw attention to what women have to put up with in regard to bc, and masculine objectification of the female form.