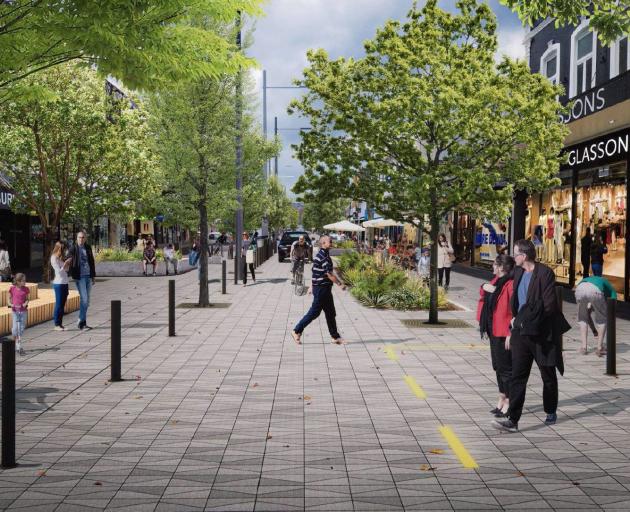 Concept drawings released by the Dunedin City Council show a car, a bike, and a pedestrian sharing a reimagined George St where the kerbing has been removed to allow for increased pedestrian access. IMAGE: SUPPLIED
Success in pedestrianising city streets generally occurs in cities with population densities 40 times — or greater — than Dunedin’s, an economist says. 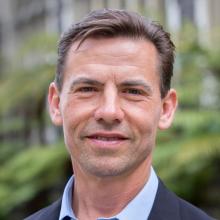 Prof Nathan Berg
Further, Dunedin residents could "lose tens of millions of dollars’ worth of time and wellbeing" as a result of fewer car parks and slower-moving traffic in the city centre.

The advice to the Dunedin City Council was part of a commentary by University of Otago economist Prof Nathan Berg — who holds the DCC professorial chair in entrepreneurship — on a First Retail Group Ltd report on the council’s Octagon Experience pedestrianisation trials from January 27 to March 23.

Prof Berg’s commentary focuses on the evidence used in both reports and the language used by city planners, but also offers commentary on the council’s apparent long-term objective of reducing the number of cars in Dunedin’s central business district.

"Clear communication about the objective of reducing automobiles and getting Dunedin residents out of cars (rather than ‘modal choice’ and ‘active transport’) would go a long way toward building good faith in direct communication with all stakeholders.

"Inflexible restrictions on automobiles run counter to advocates’ stated goals on the natural environment, public health, wellbeing and especially inequality, as the proposed restrictions will hit families on low incomes, the elderly and those living with chronic illness the hardest."

He found population density was perhaps the most important city characteristic for evaluating and forecasting the likely effects of pedestrianisation.

"Successes with pedestrianisation generally have done so in cities with population density 40 times or greater than Dunedin’s."

As Prof Berg’s and First Retail’s respective evaluation reports on the pedestrian trials, published by the council last week, provided somewhat divergent evaluations, both parties were asked to comment on the differences in the findings of their respective reports.

The reports are to be used in planning for the George St upgrade "and other major projects" — and Prof Berg’s 35-page response noted negative effects of pedestrianisation on city-centre businesses could be felt a kilometre away from the car-free zone this summer. It went on to say removing cars from the road to further carbon-neutral goals would have diminishing returns over time as initiatives were under way to reduce vehicle emissions, and limiting automobiles in Dunedin was "a ‘solution’ without a well-defined problem".

"Urban design that aims to create more traffic congestion and increase the transit time between most pairs of locations in Dunedin should be reconsidered," Prof Berg writes.

The First Retail commentary — a five-page report — summarises the consultancy’s local and regional knowledge, tourism and retail experience, and the scope of its evaluation of the pedestrian trials.

In defence of its data’s reliability and authenticity, the First Retail commentary notes it uses the same Marketview data used by Statistics New Zealand and others.

It also comments on a number of variables affecting the pedestrianisation trials.

"Like-for-like statistical comparisons in assessing the Octagon Experience are challenging because of significant variables and situations without precedent that data alone cannot identify or quantify," the report states.

"The First Retail Group report balances validated data with insight into trends, markets intelligence and behaviours that come from time spent on the ground during the trials and knowledge of wider dynamics influencing performance."

The council will discuss the Octagon Experience evaluation reports tomorrow.

The commentaries are due to be formally released today, the Otago Daily Times understands.

The ODT obtained copies of the commentaries late on Friday.

People coming in from Mosgiel and outer rural areas arent going to come to the city centre by bus. If there is no decent parking a mall along with business parks will be built outside of the city centre taking away shoppers .

The very last thing we need is a cookie cutter suburban mall in Dunedin. They are a retail blight on any cityscape. While the current CBD is not perfect, the radical revamp proposed by the DCC planners is an Octagon Experience on steroids and will doom what is now a very good CBD by NZ standards.

But the prof is missing the Greens central point. Fossil fuels and cars MUST be removed at all costs. We suckers must simply sacrifice personal freedoms to make this dream a reality. Yes, many people will suffer, many businesses will go broke, but thats ok as long as the holy grail of fewer cars is achieved.

And don't forget it is these same zealots in DCC planning and on council who are pushing this twisted reality. And "fixing" the one way system for us.

Common sense is missing, nothing else matters. Someday soon Dunedin will be terraformed into a flat, sun drenched biking mecca where we will all simply ditch our cars and cycle to the supermarket. Only in the minds of the Greens. The rest of us know better.

I doubt if he's missing it — he's simply shooting it down without resorting to calling them idiots.

Pedestrianisation is only successful in cities 40 times greater than Dunedin??? That would mean cities with more than 5 million people!! That is complete nonsense. Every European city that I know (and I know a lot) with more than 25 - 30 000 people has a very successful pedestrian area and it is even very common even in small towns of about 5000 people. If pedestrian areas would only work in huge cities then why are there malls everywhere? A mall is nothing else than a pedestrian area with a roof on top!

Population density isn't the same thing as population level. Look up the densities of those small European cities you're talking about and see how much greater they are than Dunedin's (even with smaller population levels).

The Prof is right! Population densities of those European cities are more than 50x Dunedin’s!

You have many small cities with half the people density that are reducing automobile traffic and creating more pedestrian friendly pathways.

I am not sure if being complacent is a policy.

Pretty sure it means the average measurement of population per unit area, presumably per sq/km. Dunedin lacks the population to make what DCC wants to do economically viable.

What does this mean?

This means that we should drive cars and consume oil. Sure, if you are oil exporter and a car manufacture, it makes sense. The people of NZ import oil and automobiles. It will save the people of NZ money and make them more resilient if they are less dependent on foreign imports and energy. The city should absolutely reduce automobile traffic and advocate for resilient modes of transportation.

Europeans and other countries are friendly and even Washington, DC is more friendly to pedestrians. Think about all the security aspects: look at the US where police officers are driving cars over civilians and white-American Nazi's are assaulting minorities with automobiles. NZ should learn from America's failures and mistakes and encourage automobile free city centres.

This DCC chair is about creating a self-sufficient and resilient Dunedin economy. The disgruntled professor is suggesting that automobiles drives profits and not people.