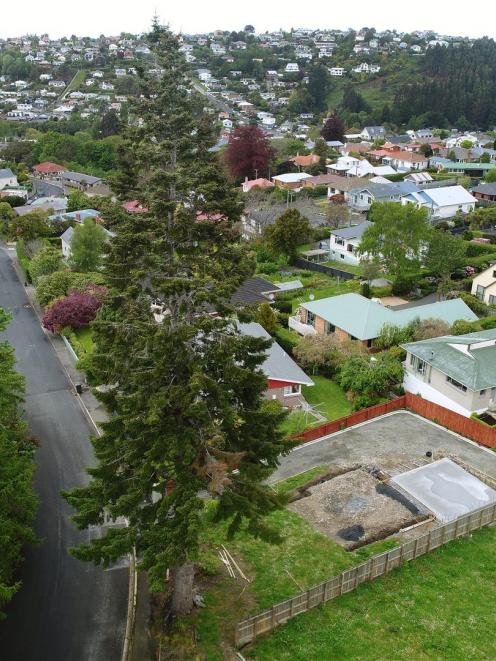 Neighbours are fighting to save a 34m-high European silver fir tree that towers over Ferntree Dr in the Dunedin suburb of Wakari. Photo: Stephen Jaquiery
The fate of a 90-year-old tree in Wakari hangs in the balance, as neighbours fight to save it despite concerns it poses a risk to public safety.

John Phillips, of Christchurch, has applied to the Dunedin City Council to have the 34m-tall and still-growing European silver fir removed from a council reserve in Ferntree Dr.

The tree - which is protected by the council - towers over Mr Phillips' property at 3 Ferntree Dr, which he is developing into a three-lot subdivision.

He argued the tree was a health and safety hazard for those living and working below, and a threat to a nearby council water main.

However, several neighbours appeared before commissioner Louise Taylor at a public consent hearing yesterday to defend the tree.

That included University of Otago zoology department head Prof Gerard Closs, who argued the tree - and others like it - were part of the reason he moved to the area.

Another neighbour, Malcolm Burns, agreed, saying he supported new housing in the neighbourhood, ''but not to the detriment of some of those surroundings''.

Dunedin Amenities Society vice-president John Beekhuis said the tree was a ''significant landmark'' and of great historical value, having formed part of an original entrance to the property in the 1920s.

Mr Phillips was also warned the tree was protected when he sought consent for his subdivision, and it was ''disingenuous'' for him to now seek its removal, Mr Beekhuis said.

However, Mr Phillips told the hearing he had been unfairly maligned as a ''greedy property developer'' and an ''outsider'' since raising the issue.

His partner had lived at the property for 15 years and often disposed of fallen branches from the tree after strong winds, he said.

He had originally contacted the council only to discuss safety concerns regarding the tree, but later applied for an emergency removal after an arborist identified ''quite serious'' safety concerns.

That included the potential for large limbs to fall during strong winds, he said.

The threat would increase over time, as the tree - which already weighed between eight and 10 tonnes - could almost double in height and triple in weight over a lifespan of up to 500 years.

If the tree was not going to be removed, he wanted an assurance from the council it was safe.

''That's what I've always been looking for,'' he said.

Council staff maintained the tree's condition did not require emergency work, and council planner Madeline Seeley opposed the tree's removal, instead recommending it be pruned as required.

Experts also disagreed, as consultant arborist Peter Weymouth, appearing for Mr Phillips, said it had five significant defects, including large limbs which could split from the tree and a compromised root system.

Both supported a pruning programme and said there was no evidence the root system was compromised.

A decision was expected within 15 working days.

There is a huge tree at the corner of St David's Street and Great King Street North too. It may be bigger than the Wakari tree. The tree may be very difficult to remove and maybe that's why it is still there...

No tree is too difficult to remove. The first consideration would be the root system, the second tthe potential for branches to fall and cause serious personal and property harm. These 'experts', instead of arguing over the root system, maybe they should work together to investigate whether in fact the foundation system is compromised or not. The root system is the foundation, it needs to be sound. The branches and foliage act as a 'sail' in strong winds, the foundations need to be strong enough to deal with that. Surely this can be determined by a collabrative approach to the basics with all 'agenda's put aside in the interests of public safety?