The lowest number of Southern road fatalities in five years has come as welcome news to police.

There were 20 deaths on Southern roads in 2021 as of yesterday - 15 in Otago and five in Southland.

It represents a major turnaround from 2020, a horror year on Southern roads when Otago posted its highest road toll in more than a decade. 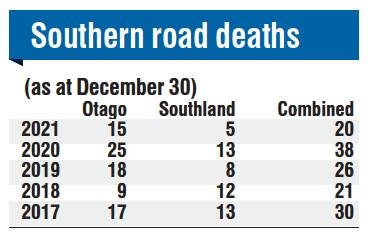 Inspector James Ure, of Dunedin, was pleased with the lower toll after six months in which police had significantly increased their focus on road safety.

"We know that a large portion of fatal accidents occur on rural sections of our roading network, and we’ve had a real focus on our rural members being highly visible and identifying and dealing with road offending," he said.

"We know that we could be having a better effect on road safety through our own efforts."

Police were working with the NZ Transport Agency and "we’ve really tried to step our game up".

He believed the impairment prevention teams, formed in Southern centres in late 2020, were having a big impact on road safety.

The teams were tasked with increasing visibility of police on the roads and targeting driving impairments such as intoxication, distractions, and fatigue.

That was paying off, as some motorists were still not getting the message, Insp Ure said.

About three weeks ago police caught about 30 drink drivers in the South in one weekend.

"It goes to show that driver behaviour around impairment is still a real concern for the district."

The teams were part of a trial that was due to end in April and would be followed by an evaluation, but indications suggested they were having a positive effect, he said.

While police had ramped up their focus on road safety in the latter half of the year, Insp Ure said he wanted that to become the new normal.

"We don’t want to back away from that. Hopefully we can maintain that and increase that presence over the coming year."