Delay in taking lead out of petrol a 'tragedy' 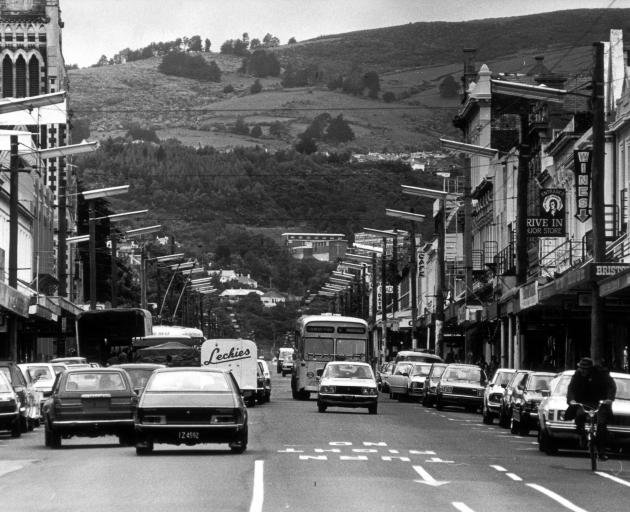 Traffic in George St, Dunedin, in the late 1970s. Photo from ODT files.
Oil industry lobbyists and complicit politicians have been blamed for the ''tragedy'' of New Zealand's 20-year delay in moving to unleaded petrol.

This comes as research from the Dunedin Study released today showed significant numbers of New Zealanders were likely exposed to enough lead to have a ''slight but significant'' effect on their IQ levels and job prospects later in life.

Dr Nick Wilson, of the University of Otago's Department of Public Health in Wellington, said the oil industry, and specifically Associated Octel which supplied the lead added to New Zealand petrol, should take some of the blame for the damage caused before lead was banned from being added to petrol in 1996.

He had previously carried out research which showed there was a 20-year delay in banning lead from petrol because of deliberate lobbying by the lead additives industry, poorly informed and vacillating politicians, and a bureaucracy which lacked technical expertise.

''Whereas other countries moved much faster, New Zealand was quite slow in responding to this.

''This is despite the fact that in the 1970s this same study [the Dunedin Study] was one of the best in the world at showing that lead was damaging the IQ of children.''

Instead of listening to researchers, politicians ''recklessly'' listened to companies with vested interests to keep lead in petrol.

The delay had lessons for today because companies with vested interests continued to lobby politicians on issues ranging from obesity to climate change.

''They need to demand good research and for that research to feed into the policy process.''

Commercial interests would otherwise continue to hold sway and the ''tragedy'' would be repeated.

She agreed that when scientific findings started coming out in the 1980s showing lead was having an effect on children, the petrol industry and others did ''fight'' the research.

However, she believed it was a good thing scientists were held to a ''high standard'' given the economic stakes of the decision to remove lead from petrol.

She believed the Government acted when it had enough evidence and was ''far-sighted'' when it banned leaded petrol.

''It seems to me that New Zealand went about it in a good way. They had a special commission, they really went about it quite carefully.''

However, the study released yesterday had lessons for parts of the world where lead was still causing an issue.

''The reason we did this research is because the issue of lead toxicity has raised its ugly head again in the developing world and also in North America.''

This included in Flint, Michigan where more than 100,000 residents were potentially exposed to high levels of lead in the drinking water.

Otago University Emeritus Prof David Fergusson said the oil industry had fought hard against research showing the potential effects of lead in petrol, which ''certainly'' led to a delay.

He founded the Christchurch Health and Development Study, which had consistently shown children exposed to lead had lower school performance and an increased risk of problem behaviours.

Eventually this research and other studies caused the oil industry to relent in the face of the evidence.

The World's most profitable commodities are Oil and Drugs. The end of these can't come soon enough, being blights on the common weal.