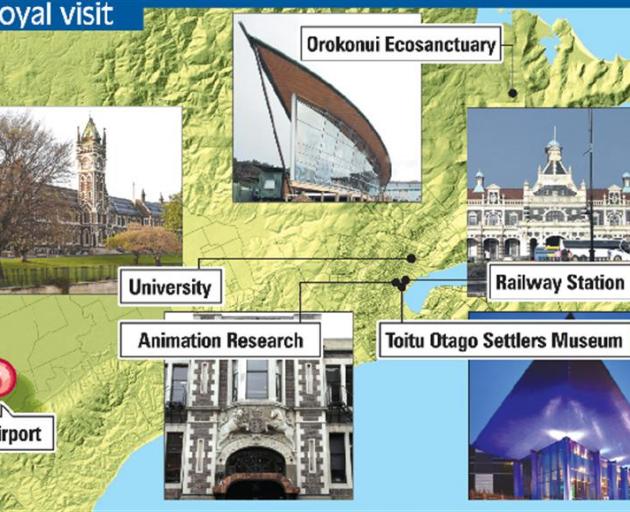 Prince Charles and the Duchess of Cornwall's visit to Dunedin next month has ''delighted'' those selected to host the Royal couple during their most southern stop.

The couple will land at Dunedin Airport on Thursday, November 5.

A train trip and visits to Toitu Otago Settlers Museum, Orokonui Ecosanctuary, Animation Research and the University of Otago are on their itinerary.

The couple arrive in Wellington on November 4 and will also visit Westport, Nelson, New Plymouth, the Waikato and Ngaruawahia.

They will then head to Australia on November 10 for five days.

''The grand entry of the Royal couple will be through the foyer of Dunedin Railway Station. It will look really impressive on the world's media.''

Thousands of people were expected to be waiting in Anzac Square to greet them.

Hundreds of others were expected at the Mosgiel station and to line the tracks between Mosgiel and Wingatui and around Abbotsford, Green Island and Caversham.

The Royals would be joined on the trip by Dunedin Mayor Dave Cull and past and present Dunedin Railway staff.

Prince Charles had not been on a Dunedin Railways train before, he said.

The couple will also visit the Orokonui Ecosanctuary.

Ecosanctuary general manager Chris Baillie said she was ''really pleased'' the ecosanctuary had been selected.

The couple would take a 50-minute guided tour and would view tuataras, Otago skinks and takahes.

''He'll love it here because it's all his key interests,'' Ms Baillie said.

The couple will visit Toitu Otago Settlers Museum, and director Jennifer Evans said she was ''absolutely thrilled'' the museum had been chosen.

Ms Evans said she could not give more details of the visit just yet.

''I'm trying to think what else I can say - what I'm really excited about is how much this visit is going to be good for Dunedin,'' Ms Evans said.

''We're going to showcase Dunedin to the world, and it's going to be fabulous.''

Its chief executive, Ian Taylor, said Dunedin's Gigatown competition win would be a big focus of the visit.

''We're going to tell the story of GigCity.''

''Instead of it just being about us, we're inviting along some other [Dunedin] companies.''

Mr Taylor said Dunedin had been a ''city of firsts'' throughout its history, most recently by securing the Gigatown win.

Camilla will attend a literary reception at the University of Otago, where Dunedin's status as a Unesco City of Literature would be celebrated.

Robert Burns Fellow Louise Wallace would give a reading and Dunedin-born and raised singer Jake Cropley would perform.

Hairy Maclary author and illustrator Dame Lynley Dodd would be among those attending the celebration.

University of Otago deputy vice-chancellor Prof Helen Nicholson said she was ''delighted'' the university was included in the royal itinerary.

''It's wonderful to be able to showcase the depth and breadth of our literary talents here in Dunedin ... We're all very much looking forward to this visit.''

The security plan and road closures would be worked out once the ''exact route'' was decided, he said.

Mr Cull said the royal visit was ''significant'' for the city and he was ''very pleased'' Dunedin was chosen as a stop.

''Not every city in New Zealand is hosting the Royals [and] it's a privilege that they are coming here,'' Mr Cull said.

''Dunedin offers a huge range of attractions for them to visit.

''There's an enormous amount of people in Dunedin who have a royalist inclination [so] this is a significant event.''

It will be the second visit by members of the Royal Family to New Zealand this year, following Prince Harry's week-long tour in May.

He was accompanying the Queen. On the itinerary were visits to Wakari Hospital and the university and a New Zealand Symphony Orchestra concert.

Department of Internal Affairs principal communications adviser Colin Feslier said Prince Charles' other visits included in 1983, with then wife, the late Princess Diana, and son Prince William. In 2012, he was accompanied by his second wife, Camilla.

Prince William and his wife, the Duchess of Cambridge, are the most recent members of the Royal Family to visit Dunedin, during last year's tour.

The Queen has visited New Zealand 10 times since 1953.