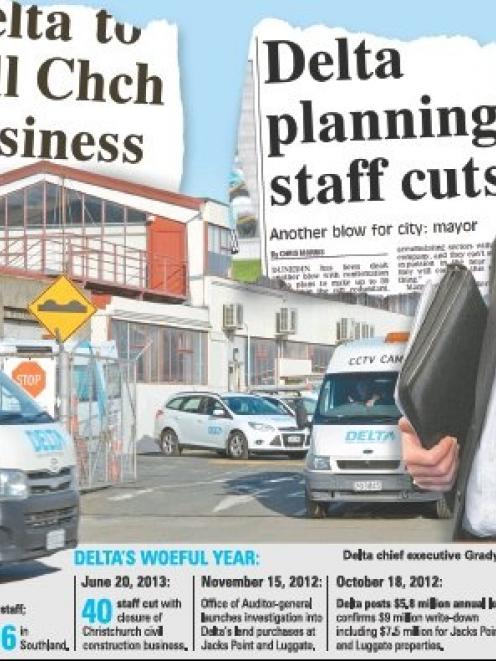 Infrastructure company Delta is again wielding the axe, with plans to cut an entire division's 77 jobs in Dunedin and other southern centres.

The Dunedin City Council-owned company yesterday confirmed it planned to close its entire civil construction operation across Otago and Southland.

The proposal - to be confirmed next week - would result in 41 job losses in Dunedin, 20 in Central Otago and 16 in Southland, out of a total workforce of about 580, Delta chief executive Grady Cameron said.

The news was delivered to staff across the company at 3pm yesterday, and left some ''white-faced'' and distraught, it was said.

Dunedin Mayor Dave Cull said it was another ''bitter blow'' for Dunedin, on top of recent job losses at Hillside and plans for more within New Zealand Post.

''It's a bitter blow, and it will be a particularly bitter blow for those individuals,'' he said.

However, the company had been left with no choice when faced with significant losses within the division, he said.

They were the result of declining spending by local governments, including in Dunedin, as more money was sucked into the rebuilding of Christchurch.

Delta also faced the lingering effects of the global economic downturn, and the loss of key contracts, including two in Dunedin and Central Otago - together worth $11 million - in recent weeks.

''It's really been the perfect storm,'' Mr Cameron said.

''At some point, we needed to make these difficult decisions to ensure we did protect the remaining jobs in the business.''

Staff were being consulted over the proposal, and a final decision was expected next Friday, he said.

The company employed 44 staff earning over $100,000, some of whom would be affected by the changes, Mr Cameron said.

It was the latest piece of bad news in a bad year for Delta, which has already cut more than 70 staff in Dunedin, Central Otago and Christchurch in a series of announcements since the middle of last year.

That included the loss of 40 staff with the closure of the company's Christchurch-based civil construction business last month.

Delta cut about 20 staff from its Dunedin roading and drainage divisions in September last year, and seven staff from its Central Otago operation months earlier.

It also faced an investigation by the Office of the Auditor-general, after a $9 million write-down in investments, including properties bought at Jacks Point, in Queenstown, and in Luggate.

Mr Cameron said the latest bad news was a ''pretty sad day'' for the company, its workers and their families.

However, he denied the company had overreached while undergoing expansion, or was now facing a terminal decline.

Instead, the company had been forced to reposition itself to focus on more long-term, sustainable revenue streams, but was coming to the end of a ''very painful process'', he said.

The core business - including asset management and energy work - remained profitable and solid, he said.

''I certainly believe this is a company that's got a very good future,'' he said.

He blamed the Dunedin City Council, in part, for failing to support the company with enough work to ensure it could be profitable in all areas.

However, he also pointed the finger at Delta management for expanding too quickly, including into Christchurch and property investments at Jacks Point, in Queenstown, and in Luggate.

''You put your house in order at home before you go looking over the fence,'' he said.

The company had left ''epitaphs of itself'' all over the South Island, he said, and workers - some of them after decades of services - were now being ''put on the bloody scrapheap''.

''There are people in desperate need, in the middle of winter, with families to support, who are going to really struggle.

However, Mr Cull said that was a technical step for the council as shareholder, and the council did not accept responsibility for the company's situation.

Delta - like other council companies - was there to provide dividends to the council, which were used to offset rates, and was not to be subsidised by the council.

Delta had missed out on the council's $3 million water maintenance contract, but that was because it was felt the company did not have the capacity to do the work, Mr Cull said.

''It would come back to bite us if they didn't [have the capacity],'' he said.

Mr Cameron said the lost contracts were ''obviously factors'' in the company's position, but just part of a bigger picture.

''The reality is there has been a substantial downturn in the market in terms of the workload that's there,'' he said.

Otago Chamber of Commerce chief executive John Christie said he understood the company's need to restructure, but the announcement would still be ''pretty disappointing'' for those facing job losses.

The losses - together with others in the city - would have a cumulative effect on the city's economy, and it would be difficult to absorb them all into new positions immediately, he said.

There were some positive signs of growth in Dunedin, but that would be ''cold comfort'' for those losing their livelihoods, he said.

''Nobody welcomes that news.

''It's just very painful for those that get affected,'' he said.