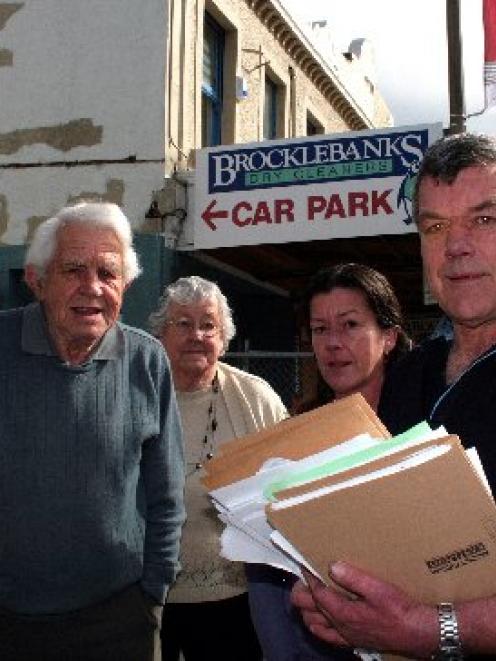 Over the next few weeks the 100-year-old building will be demolished, ending a "nightmare" that began with a simple painting job last year and has cost the Brocklebank family 13 months of lost rental income.

Painters noticed cracks in the exterior of the building, the Dunedin City Council inspected it and the four businesses in the building, including Brocklebanks Dry Cleaners, were told they needed to vacate.

"That was the only thing quick-smart about it," Sue Brocklebank said.

"Everything else has been a drawn-out battle." Despite being subject to a demolition order, the building still had to go through the resource consent process to demolish and re-build it, which included a three-month wait for an archaeologist's report.

Sue's mother Norma Brocklebank said after a meeting with their builder last week, they were confident of being able to demolish the existing building next weekend and start re-building two weeks later.

Norma said they had been happy to comply with everything but she felt somebody at the council should have managed the case, instead of having to deal with a lot of different people.

"We have got that much correspondence and no-one came over.

"It has been all emails and phone calls."

She said they had to pay an archaeologist to do a report on the site but that took more than three months to arrive, further delaying their plans for a new building.

Norma's son Roger Brocklebank said the Historic Places Trust had to get involved because "someone found a photo that put it pre-1900. We always thought the building was [built in] 1908".

He said they then had to get a contamination report which involved drilling big holes through the concrete floor of the building.

The process would have been much easier if they had been allowed to demolish it first, he said.

Brocklebanks Dry Cleaners was still operating from a building behind the condemned building.

Two tenants were keen to move into the new building in October, if it was finished in time.