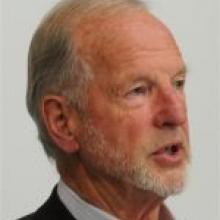 Tom Richardson
Dunedin property developers are set to square off with the Dunedin City Council from today, as they attempt to have a new charge on development overthrown.

Developer Tom Richardson, who was behind the establishment of the Construction Industry and Developers Association, set up to deal with the issue, said yesterday he was "pretty confident" of success.

The association will be a major submitter at the development contributions hearings committee, which has three days set aside to consider what has become a controversial issue.

The hearings are due to begin this morning, subject to weather conditions.

Development contributions are charges paid by property developers to meet demands on infrastructure such as water and wastewater, roads and reserves.

If applied at 100%, those could range from $5944 for a new house in outlying parts of the city to $40,650 for one in West Taieri. It could also affect individual property owners, with one homeowner recently discovering under the policy he could face a possible $20,000 council fee to split his property into two.

If the draft policy went ahead unchanged, the council could collect up to $46 million over the next decade, compared with about $11.8 million under the existing policy.

In May, the council agreed to delay the hearings, following noisy criticism from developers.

A report to tomorrow's hearing from council economic policy analyst Hamish Orbell said "a large number" of the 197 submissions received had "raised issues" with the draft policy, leading to calls for it to be abandoned.

Some of the many arguments from submitters against the policy included that the low rate of growth in the city - which was at odds with council predictions - meant the policy was unjustified.

The council would gain financially from the development of new homes through additional rates being paid, and that gain would far outweigh any one-off development contribution.

Some submitters, Mr Orbell said, had questioned the motivation behind the policy, with concerns it was "driven by the need to recoup the cost of past spending decisions". He has made no recommendation to the committee other than to suggest it "carefully consider the issues raised in each of the submissions".

Mr Richardson said his organisation had three hours set aside to make its submission tomorrow, and eight speakers, including lawyer Phil Page, would present arguments from areas including development, valuation, investment, building and surveying.

There was a trend away from such contributions, which were being seen as a "serious impediment" to the development of new housing in New Zealand, Mr Richardson said.