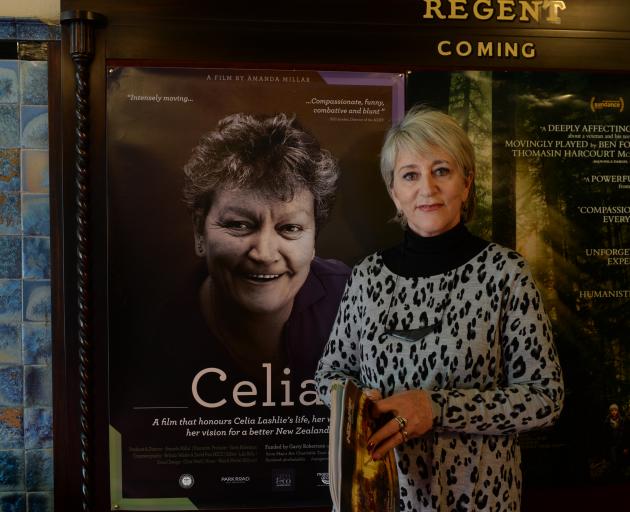 Former Dunedin journalist Amanda Millar produced and directed Celia, a documentary about the life and work of social advocate the late Celia Lashlie, screening at the 2018 NZ International Film Festival. PHOTO: LINDA ROBERTSON
Celia Lashlie was diagnosed with terminal cancer at the end of 2014: less than two months later, the 61-year-old was dead.

But in the interim, she had asked her friend, former television journalist Amanda Millar, to make a film about her social justice work.

``And when Celia asks, you don't say no,'' Ms Millar said in Dunedin where she was due to speak at a screening of Celia last night.

A former prison guard who became an educator and highly-regarded author, Celia Lashlie had been a charismatic and relentless campaigner for equality of opportunity in New Zealand, raising awareness of the social issues facing the country.

The plan had been to start filming in February as Ms Lashlie wanted to spend January with her family.

But when her condition suddenly deteriorated, Ms Millar was asked to bring a camera to the house on Valentine's Day 2015 to film an interview with her dying friend. No more filming was possible after that, as Ms Lashlie became too ill. She died two days later, on February 16.

``That one and a-half-hour interview was critical. It was the basis of the film,'' Ms Millar said.

A very private person, Ms Lashlie did not want the film to be about her, but recognised it would be her last chance to share her vital messages about how to change the lives of those involved in New Zealand͛s appalling violence, prison and suicide statistics.

Ms Millar, whose career in journalism began at the Evening Star in Dunedin, spent three years making the documentary. She struggled to find funding for the film until, after an initial Givealittle site raised some money, coincidence in the shape of former Mosgiel electrician Garry Robertson stepped in.

Mr Robertson, now a land investor and farmer, was stuck in traffic in Auckland in February last year when he heard Ms Millar asking for Givealittle donations on RNZ.

Because of his respect and high regard for Ms Lashlie and her work, he donated $1000.

Then he met Ms Millar and, after talking to her, hearing about the trouble she was having funding the film because it was to do with domestic violence, ``a subject people don't like talking about, let alone financially supporting it'', he decided to fund the whole documentary.