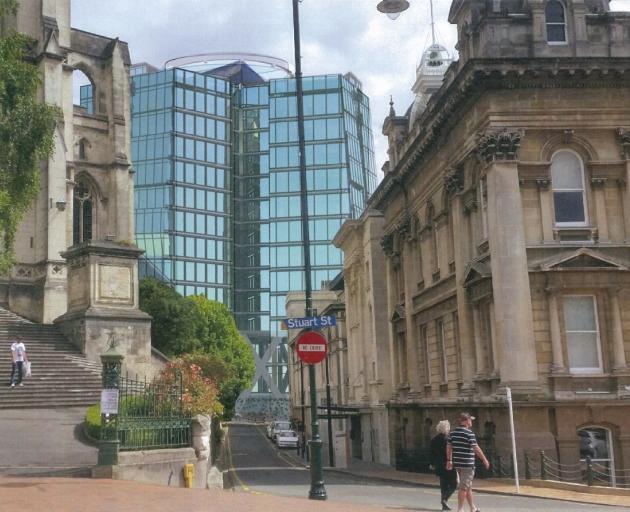 The team behind Dunedin's latest five-star hotel bid insist their plans are sound, despite conceding the 17-storey tower will dominate its surroundings.

The comments came as project architect Thom Craig, of Christchurch, was questioned for more than an hour yesterday by independent commissioners hearing the second day of arguments for and against the proposed hotel.

Mr Craig, answering questions from commissioner Gavin Lister, accepted the 60.3m-high tower in Moray Pl would be the tallest building in the central city.

But, despite casting a shadow stretching across the Octagon and neighbouring Kingsgate Hotel at times in winter, Mr Craig defended the design.

The tower was an ''elegant'' solution that also offered the city ''a stand-alone iconic structure'', while balancing competing concerns from the developer's requirements to the area's heritage values, he said.

Other design options had been considered by Tekapo businessman Anthony Tosswill and his team. Alternatives had included a taller, more slender tower, to minimise blocked views and shading, but the efficiencies did not stack up, he said.

Instead, the hotel's design incorporated other factors to address concerns, such as the tilted glass facade, which would reduce glare and the perception of the building's dominance, he argued.

Despite that, independent urban design consultant Garth Falconer questioned whether other options to reduce the hotel's height had been exhausted.

The design envisaged a hotel reception, internal street and ''living room'' of public facilities on an elevated platform two levels above Moray Pl. That gave it desirable views over the city, but lowering the reception level to the street would reduce the building's overall height, Mr Falconer said.

Likewise, a larger single level of excavations for underground car parks - rather than the planned two-level excavation over a smaller footprint - could further reduce the height, he said.

Mr Craig said lowering the reception level would rob it of attractive views, but Mr Falconer disagreed, urging the commissioners to visit the site and consider the argument.

The hotel's shadow would be at its worst at winter solstice, when it would stretch across the grass and outdoor seating in the southwest corner of the Octagon from 2pm before moving to cover the southeast corner from 3pm.

By 4pm, the impact was gone, as the Octagon was in shadow anyway, Kurt Bowen, a surveyor and principal of Paterson Pitts Group, said.

Despite the shading, consultant planner Don Anderson, appearing for Mr Tosswill, said the project should be seen as ''a celebration''.

''It indicates Dunedin is actually open for business.

''We cannot rely on the past. As long as we don't destroy too much of the heritage buildings, we have to move forward.''

Urban designer David Compton-Moen, also appearing for Mr Tosswill, said the hotel would add vibrancy and be a ''considerable improvement'' on the existing car park.

However, he was grilled at length by Mr Lister after arguing the visual impact of the tower would be ''indiscernible'' in some areas, because the change in view would not be negative.

Most public submissions expected to begin yesterday were pushed back until later in the week because of delays getting through evidence from Mr Tosswill's representatives.

The only public submitter to speak, Barry Simpson, was quick to remind Mr Tosswill of public concerns about the hotel's height.

He also suggested the developers were trying to spend their way to a consent, despite clear breaches of district plan rules.