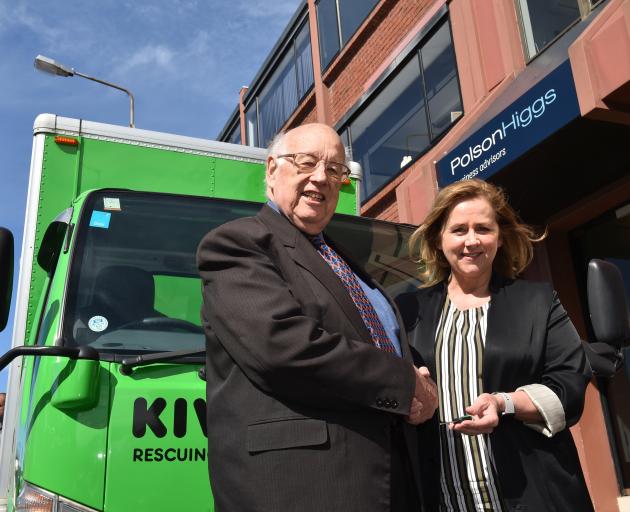 Dunedin Casino Charitable Trust chairman Stan Rodger hands over the keys to a new delivery truck for KiwiHarvest founder and board member Deborah Manning. PHOTO: GREGOR RICHARDSON
KiwiHarvest has been struggling to keep up with Dunedin’s growing generosity.

But yesterday, the national fresh food rescue charity got a helping hand from the Dunedin Casino Charitable Trust in the form of a $30,000 grant to buy a new, larger truck to transport rescued food.

KiwiHarvest founder and board member Deborah Manning, of Dunedin, was delighted with the support.

She said KiwiHarvest had another truck operating in Dunedin, but it was not as big as the one it received yesterday.

"The reason we need this truck is because we have been offered pallets of food, not just boxes or bags of food, and we didn’t have the ability to transport it.

"So this way, we can open the back doors and forklift the pallets in.

"This represents a huge increase in the amount of food that we can collect and distribute back into the community.

"It’s fabulous. It allows us to rescue more food and nourish more vulnerable people in our communities."

Since 2012, about 1.2million kilograms of fresh food has been rescued in Dunedin and turned into about 3.5 million meals.

Ms Manning said the truck had been named Rourou Ora.

"Rourou means contribution, but also is a name for a food basket. And Ora means to be in a state of wellbeing.

"Conceptually, the name refers to the contribution bringing wellbeing, life."

Dunedin Casino Charitable Trust chairman Stan Rodger said the $30,000 truck was one of the larger donations it had made to community organisations over the years.

"Over the lifetime of the trust, more than $2 million has been granted to Dunedin and Otago charities.

"This is a notable one, a big one.

"It was given to KiwiHarvest because they have an impact on the lives of so many people who are at risk in the community.

"They tick all the boxes as far as the trust is concerned."

It rescues surplus fresh food from commercial outlets, educate businesses and consumers, and engage them in being part of the solution and end food waste in New Zealand.

Great news. The most frustrating thing, by far, i encountered when i worked at a local supermarket for a short while, was just how much food was thrown out every day. Even tinned food with dents in it, even though there were no holes in the tin.

Humans in 1st world countries are insanely wasteful when it comes to things like this so i'm glad KiwiHarvest exist.