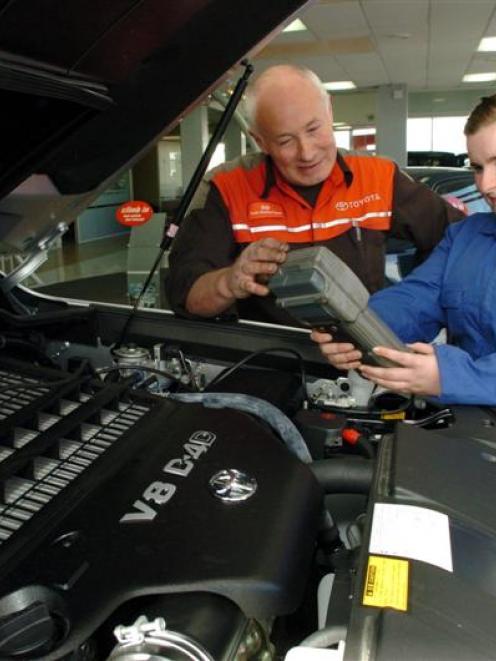 Queens High School pupil Hannah Gray receives training on a piece of diagnostic equipment from Toyota techician Sid Jackways while gaining automotive engineering experience at Cooke Howlison Toyota in Dunedin. Photo by Jane Dawber.
When Hannah Gray was a child, she did not play with Barbie dolls like most girls her age. She preferred Action Man dolls because they could do ``better stuff''.

"They came with more things to do with them,'' she said. "They had ropes that they could swing on and guns that could shoot - that kind of stuff. They had mechanical components.''

Later, as she was growing up, she developed a love of pulling things apart and putting them back together to see what made them tick.

"I always helped Dad with fixing his cars. I'm not a sewer or a cooker. It didn't take me long to work that out.''

So it is no surprise that Hannah decided pretty early on that she wanted to pursue a career as an automotive mechanic.

Now, the 17-year-old Queens High School pupil is one of a select few in New Zealand who have been chosen to participate in the Ministry of Education's Youth Apprenticeships pilot programme which offers training and work experience to secondary school pupils so they can earn
credits towards an apprenticeship while they are still at school.

For Hannah, being a part of the Youth Apprenticeship pilot programme means she is on the road to becoming a mechanic much earlier.

Since the beginning of this year, she has been studying tourism, design, art and English at school like "normal kids''.

But on Fridays, she swaps her school books for a pair of overalls and works alongside mechanics at Cooke Howlison Toyota, gaining experience in the automotive industry.

"I saw it as a way to get more qualifications while I'm at school so that I can get into the industry easier when I get out of school.  "A lot of kids leave school and go to tertiary education and find a couple of months into their degree that it's not for them - it's not what they expected.''

She says the youth apprenticeship programme has helped her see she is making the right career choice at an earlier stage of her life.

Queens High School in Dunedin was chosen as one of the lead schools for the introduction of youth apprenticeships because of its excellent reputation in using similar programmes like Gateway and developing relationships with local employers.

The programme is part of the Government's Schools Plus initiative which will see all young people engaged in school or some other form of education, training, or structured learning until they are 18.

It aims to engage young people's interest in education and skills training by connecting what they are doing at school to what they want to do as a career.

Education Minister Chris Carter said about 14,000 young people left school each year without a level 1 national certificate of educational achievement (NCEA) qualification and without going on to any further study or training. Forty percent left without NCEA level 2.

"While current high employment levels are offering a lot of unskilled jobs, New Zealand needs to invest in a higher skills' base to sustain economic growth, improve living standards and help lift productivity.

"Greater participation in and achievement from education will improve the lives of individuals and families and contribute to building stronger communities.

"Over time, it will impact on problems like crime, poor health, poverty and the mismatch which exists between labour supply and the economy's need for a skilled workforce,'' he said.

She said the insight into the actual day to day aspects of each business and the degree of pupil involvement was truly significant to her pupils.

"They become valued in the workplace and are taken seriously, gaining self-esteem, enjoyment and a variety of skills.

"They make valuable links with employers, other employees, industry assessors and can seek advice, encouragement and support from a range of others.

"There is an aspect of paid employment taken into consideration as well,'' she said.

On top of the pilot programme, the company continued to support the Ministry of Education's Gateway project and the Otago Polytechnic's pre-apprenticeship course. All three give work experience to budding automotive mechanics.

"We've always been community conscious, so that is one of the reasons why we're doing this. It's a way to give something back to the community.

"We want to help school kids to get a taste of some of the different jobs available in the community.''

Mr Bennetts said he was delighted with the impact the youth apprenticeship pilot programme was having on Hannah.

"She's doing well. She fits in well with the team here and she's prepared to learn.

"This is a good grounding for her career.''

Most importantly, the ministry's initiative has been given the big thumbs up by Hannah and other pupils in the programme.

Hannah said without it, her future would not have looked so rosy.

"I probably wouldn't have left school, but I would have just slid through on my school work. I would have got pretty average marks.

"My marks are really good this year because the programme has inspired me - I've got something to work towards.''

Hannah said next year she hoped to study automotive engineering at Otago Polytechnic.